Posted on February 12, 2020 by walkableprinceton 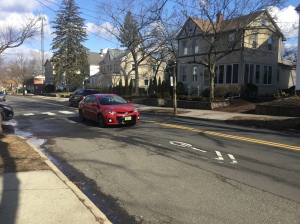 On Thursday night, the town of Princeton will host its first public consultation on reconstruction of Witherspoon Street to “formulate a master plan for this very important corridor”. All aspects of the street will be considered, including repaving the road, sidewalks, crosswalks, sewers, lighting and street trees. The project is also an opportunity to improve conditions for cycling on Witherspoon Street. Although it is a prime route for people riding in and out of Princeton, Witherspoon Street is not a pleasant place to ride a bike. The town’s “Complete Streets” policy requires street designs to consider the needs of all users, and the increase in popularity of cycling, e-bikes, and electric scooters poses a question about how such users can be safely accommodated and encouraged. What solutions might work on narrow Witherspoon Street? Here are some options…

Option 1: Existing conditions, “Shared Lane Markings” with Parking. At present, Witherspoon street has ‘sharrows’, which are stencils of a bike with some arrows painted on the road (see photo below). They are supposed to encourage cyclists to ride on the entire roadway, and to alert drivers to the presence of people on bicycles. A survey of Princeton residents conducted as part of the 2017 Bike Master Plan found that fewer than 10% of respondents felt safe cycling on roads with these kinds of shared lane markings. Sharrows are therefore not suitable for encouraging high levels of cycling. On the other hand, sharrows are cheap, and do not require changes to traffic circulation or parking. If the town is looking for other low-cost, low-impact approaches, it may also want to put up signs saying “Cyclists May Use Full Lane”.

Option 2: Painted bike lanes, possibly with parking allowed on Sundays. More than half of residents surveyed as part of the 2017 Princeton Bike Master Plan said that they felt comfortable riding on roads with painted bike lanes. Bike lanes on Witherspoon street are therefore likely to encourage much more cycling, but because of the narrow road width, on-street parking would have to be removed to make space for regular 5-ft bike lanes. That could cause problems for businesses and churches on Witherspoon Street. One possibility to reduce the impact would be to allow parking in the bike lanes on Sundays when church services are happening. 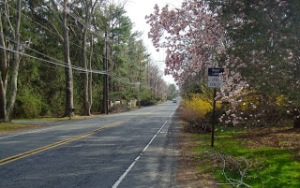 Bike lanes on part of Princeton Pike near Lawrence Township. These are the only bidirectional bike lanes on any road in Princeton. (click to expand)

Option 3: Some kind of traffic calming, cyclists share travel lane with cars. Approximately 90% of cyclist in Princeton say that traffic speed influences where they feel safe riding. Reducing traffic speed, using curb bulb-outs or speed humps, is therefore one approach that may make Witherspoon Street more attractive to a larger share of potential bike users. Traffic calming measures have been installed on some streets in Princeton, notably in the Western Section, and on Jefferson Road. Not all of these traffic calming measures are effective or popular with cyclists. Many cyclists dislike curb bulb-outs, which force them to merge into fast-moving traffic. Traffic calming devices would have to be selected carefully, and their effectiveness in encouraging cycling should be monitored. On the other hand, traffic calming would not require widespread removal of street parking. 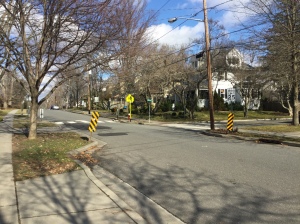 Curb bulb-outs on Jefferson Road in Princeton, intended to reduce the speed of traffic. (click to expand)

Option 4: “Super-Sharrows”. The 2017 Princeton Bike Master Plan recommended the use of ‘enhanced sharrows’ to encourage cycling on Witherspoon Street as part of a town-wide network of bike facilities. Enhanced sharrows are similar to the existing bike markings on the road, except they have a green background to make them more visible (see image below). It’s not clear how much they would encourage cycling, and they are a non-standard traffic sign. As the Witherspoon Street area has recently been designated as a historic district, the green background may also be considered visually unwelcome by historic preservationists. On the other hand, this treatment has many of the same advantages of ‘regular’ sharrows, in that it doesn’t require any changes to traffic circulation or on-street parking.

Option 5: ‘Advisory Bike Lanes’ with on-street parking. Although regular bike lanes on Witherspoon St. would require the removal of on-street parking, the use of ‘advisory bike lanes‘ would preserve parking and make a dedicated facility for cyclists. As seen in the image below of Scott Street, near Harvard University in Cambridge MA, streets with advisory bike lanes usually have one big central travel lane with no center line. Cyclists have bike lanes to ride in on either side, marked with hatched white lines. Drivers of motor vehicles must wait for a safe opportunity to pass, and can enter the advisory bike lane if not cyclists are present. This type of facility is likely to reduce traffic speed, create bike lanes for cyclists, and not affect the existing street parking, but it may be unfamiliar to some road users.

Option 6: Some kind of shared-use path. Princeton Township had a policy of creating asphalt ‘shared-use paths’ for cyclists and pedestrians to share. These kinds of shared-use paths were also expanded in the recent reconstruction of Walnut Lane near JW Middle School. At best, shared-use paths create a bicycle facility that is separated from motor traffic, something which is very popular with cyclists. They are also usually compatible with on-street parking. The disadvantages are that conflicts between cyclists and pedestrians / dog-walkers are increased, the paths are usually of sub-standard width, and a dangerous condition for cyclists is created at every intersection. On Witherspoon Street, the presence of mature street trees may make construction of a shared-use path very difficult or impossible.

A shared-use pedestrian/bike path on Walnut Lane in Princeton. (click to expand)

Option 7: Switch to one-way car traffic, build a protected cycle-way. More than 90% of Princeton residents say they feel safe cycling in a bikeway that is separated from traffic. Such ‘cycle tracks’ have been built in other communities (see image below), but Princeton roads are usually not wide enough to accommodate two-way traffic, on-street parking, and high-quality separated bikeways. Protected cycle ways could be created on Witherspoon Street by conversion of one lane that is currently used for motor traffic. That would require a switch to one-way traffic flow. Motor vehicle traffic going in the opposite direction would have to be re-routed to another street, which might also become one-way. This would be the most disruptive option for traffic circulation, but would have no impact for on-street parking, and would create the best conditions for cycling. 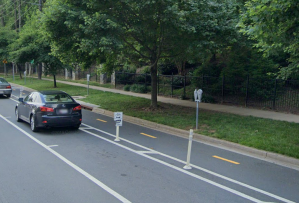 A protected cycle-track in Bethesda MD. (click to expand)

To provide input on the Witherspoon Street Master Plan, attend the public meeting at Monument Hall (old Princeton Borough Hall) on Thursday, Feb 13, 6.00 p.m. – 8.00 p.m. or contact the Princeton Department of Engineering. Full details about the project are available at the municipal website at this link.  ‘Walkable Princeton’ is not affiliated with Princeton municipal government and the poll below will not be used for official planning.