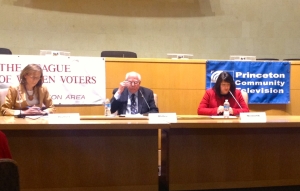 It’s widely recognized that Princeton housing has become unaffordable to many people who work in town- but what are the solutions? At a recent forum for the three Democratic Party candidates fighting for the chance to take part in the November election to Princeton Council, some differences in approach seemed to emerge.

Questioned as to whether there is sufficient affordable housing in Princeton, the three candidates (incumbents Jo Butler and Bernie Miller, and challenger Sue Nemeth) agreed that there is a big problem. (See video below, 18’30”.) Waiting lists for affordable rentals in Princeton are currently measured in years, and there are many challenges for the town when it comes to adding new units.

All the candidates pledged their support for improving opportunities for people of all incomes to access housing in Princeton. As Bernie Miller said “We cannot live in a community where the middle class is squeezed out over a period of time and we only have  housing that is affordable by state standards, and housing that is affordable to the 1%“. Jo Butler named one potential opportunity to build new affordable units- at the current Princeton First Aid and Rescue Service site on North Harrison Street. PFARS has signed a Memorandum of Understanding with Council to move its operations to a new site on Witherspoon Street, and the town looks set to inherit the old Harrison Street site. Nonetheless, building affordable units at this site is years off, and can only be expected to have an incremental effect on affordability.

The candidates were asked a second question with relevance for affordable housing: “What process do you propose or support for the rezoning of Lower Alexander Street?” (see video below, 22’45”). The Lower Alexander tract, opposite the Springdale Golf Course and south of the Dinky station, is a potential site for new housing, but existing zoning would not allow it. The current zoning is for services, dating back to the time when businesses such as a long-shuttered lumber yard operated at the site.

Both Butler and Miller framed the possibility of rezoning Lower Alexander as a risk- something that should be undertaken only with caution. Nemeth stood apart from her Democratic Party colleagues in wanting to “pro-actively” review the zoning at Alexander Street- and at other sites in town- arguing that the zoning is no longer addressing the community’s needs. Nemeth also said that neighborhoods should be involved in the discussion regarding zoning at the earliest opportunity. Miller and Butler also favor zoning reform, but said that the existing process was adequate for Lower Alexander Street.

Zoning is at the heart of Princeton’s affordability crisis, driving up the cost of housing and encouraging people to make long car commutes to cheaper housing elsewhere. Sue Nemeth’s run for Council as part of a slate with Bernie Miller has drawn criticism from some local residents, but she has stimulated a useful conversation on the zoning issue. There is a big question about how far and fast redevelopment should proceed in Princeton- where population growth has lagged local townships for decades. Supporters of the ‘Fragile Princeton’ theory argue that the town cannot take more residents, because they would overload schools, roads and the sewer network. Supporters of a ‘Princeton of Opportunity’ vision believe that these problems can be solved just as they were solved in the past, and that new housing options would help sustain a truly inclusive community.

Certainly, new housing at Lower Alexander would minimally impact existing neighborhoods, and provide a new choice for people who currently commute to Princeton by car to live within walking or cycling range of downtown employment. It’s great that these questions are now being widely debated around the  town.

Find out more about Jo Butler at: http://jobutler.com. Find out more about Sue Nemeth and Bernie Miller at: ‘The Nemeth & Miller for Princeton Council’ Facebook Page. We welcome comments about how best to address affordability in Princeton, and what candidates offer the best vision on the way forward. Feel free to comment using the form below!