Do You Know What Princeton Landmarks Are Built On ‘Brownfield Sites’? 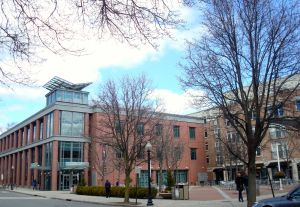 Princeton’s library / Hinds Plaza was built at a ‘brownfield site’. (click to expand.)

Princeton’s recent Democratic Party Council Candidate Forum- which we wrote about earlier this week– featured an amazing moment when the moderator skipped a crucial question about land use in Princeton. This oversight meant that the audience missed out on getting the opinions of the three candidates on a subject that has become a controversial subject of public complaint, and which has made the town the subject of a new legal battle in County Court. Most importantly, this issue is at the very heart of redevelopment in Princeton.

The League of Women Voters does a great public service by putting on the candidate forums, because it is one of the few opportunities for the public to hear about the policies of our prospective Council candidates. The candidate forum on April 30 coincided with an incredible rainstorm, which flooded local roads and resulted in a light attendance. Those who did struggle through the inclement weather had an opportunity to write questions that were posed to the candidates but an important question was skipped (see video, below, 33’10”). The moderator asked:

“Does the word ‘brownfield site’ mean something to everybody here? …I’m not familiar with that, so I think I’ll pass on that question.”

What is a ‘brownfield site’? Here is a definition, from the federal government:

“Brownfield site: abandoned, idled or underused industrial and commercial properties where expansion or redevelopment is complicated by real or perceived environmental contamination.

Although this definition may make you think of the decaying mills of Trenton, for example, brownfield sites are much more widespread, and many exist in Princeton. For example, the Ivy Inn on Nassau Street sits on the site of a former gas station- an example of brownfield redevelopment. In many cases, redevelopment of a brownfield site raises questions about pollutants arising from the former use. The Princeton Public Library, Spring Street parking lot, and apartments around Hinds Plaza (see photo above) were all built as part of a redevelopment that was held up because of the need for remediation of possible coal tar in the soil at the site.

Re-use of brownfield sites is therefore an important question for addressing questions relating to infill redevelopment in Princeton. In a mature community, where most available land has already been dedicated to some use, infill redevelopment is the major way in which the community’s needs for housing and commercial uses will be fulfilled. Brownfield redevelopment is moreover a really good thing because re-use of an previously-developed site reduces the pressure to build on ‘greenfield’ sites at the urban periphery where fields and forests remain.

Princeton’s Council candidates ought to know all about brownfield redevelopment- because every Council meeting for months has been the scene of residents complaining about the demolition and rebuilding process at the old Princeton Hospital site. Some residents have argued that the site is likely to be contaminated with all sorts of hypothetical pollutants, and have demanded that extensive testing is carried out. Princeton Council retained a professional environmental consultant to advise them on what testing might be required, then sent him back to rewrite his report when he didn’t ask for as much testing as they thought was appropriate.

The Town of Princeton is now facing a court challenge from the developer, AvalonBay, who are taking issue with the demands placed on them. This is the fourth  legal battle facing the town over the redevelopment of the hospital site. AvalonBay have sued once before (a case that was settled) and two residents groups (‘Princeton Citizens for Sustainable Neighborhoods’ and ‘Association for Planning at Hospital Site, LLC’) have previously unsuccessfully challenged the redevelopment process. Nobody likes to be sued, but the latest court case is likely to clarify just how much leeway Council has in imposing testing demands on  developers at brownfield sites. This is important, because the issue is sure to come up time and time again in future.

It’s too bad that we didn’t get to hear what the prospective Council candidates’s thoughts are about brownfield redevelopment. Specifically, what sort of sites should be subject to testing- and how much? Who should decide how much testing is necessary? If ‘Safety First’, is the key consideration, should testing be required for new-build single-family homes as well? What about garage conversions? Or are existing State environmental protection rules sufficient? Whoever is elected to Council this November, these questions are sure to pop up again.

What are your thoughts on brownfield redevelopment? Let us know in the comments section below.

1 Response to Do You Know What Princeton Landmarks Are Built On ‘Brownfield Sites’?