Posted on March 11, 2020 by walkableprinceton 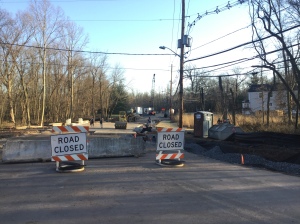 The Alexander Street work zone, where two bridges are being replaced. (click to expand)

In late 2019, Alexander Street, one of the busiest roads leading into Princeton, was closed for a period of 6 months, to allow replacement of two bridges. Traffic counts show that Alexander St is used for over 7,000 motor vehicle trips per day, so many experts predicted that closing the road would cause major problems. The chief of police in Princeton said that roads would be “very congested…we want people to understand there are going to be delays during rush hour.” But just how bad did the delays get? We measured travel times before and after the construction project began, and found (perhaps surprisingly) that most Princeton commuters are experiencing delays of 3 minutes or less on trips into town during the morning rush hour. 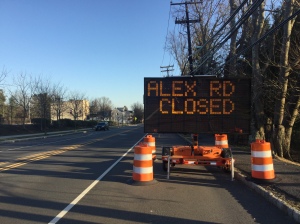 Display board indicating the closure of Alexander St/Alexander Rd. (click to expand)

In 2019, before Alexander St was closed, we measured how long it took drivers to get from a number of addresses in local towns to Palmer Square, in the heart of downtown Princeton. Travel times were measured using Google Maps traffic layer. Most drivers have cell phones in their vehicles, which are constantly sending signals to nearby cell phone masts. That means that companies like Google can track the location of cell phones, and precisely measure the flow of traffic. We made screenshots of travel times at 8 a.m., on at least 6 days, when school was in session, which were not holidays, or impacted by sudden bad weather, or emergency construction work. A total of 166 trip time measurements were recorded (full .xlsx data set available here). Trip times were the same in May and October of 2019, before Alexander St closed. But what happened when the construction began?

We considered three randomly-selected addresses for which the fastest route into Princeton would normally involve driving on Alexander St. When Alexander St closed, we expected these trip times to get longer, because commuters would no longer be able to use the quickest way into Princeton. Trip times did get longer in each case – but only by about 2 or 3 minutes: 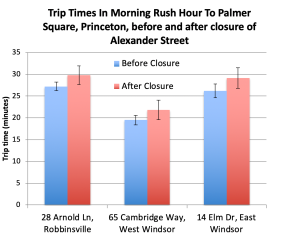 If drivers that normally used Alexander St to get into Princeton made a detour because of the bridge replacement project, did that cause problems on other roads leading into town? We tried to test that by considering trips from other addresses for which the fastest route into downtown Princeton does not usually involve Alexander St. For these trips, drivers would normally use Princeton Pike, or Washington Road, or Route 27, and might expect delays if traffic from Alexander St was displaced because of the construction project. But there was no evidence at all that displacement of Alexander St traffic caused delays for these trips. Travel time was the same before and during the bridge replacement project: 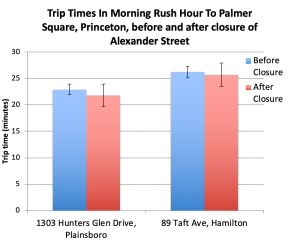 For a small number of drivers, who make local trips along the Alexander St corridor, the bridge replacement project caused a bigger impact on travel time. We considered the time taken to commute from an address in the Canal Pointe Blvd development into downtown Princeton. For this trip, the only sensible route involves driving up Alexander St. Delays were more like 6 minutes per trip, presumably reflecting the fact that these drivers were forced to make a bigger detour to find an alternative route into town:

Trip times for travel between Colebrook Court (Canal Pointe Blvd neighborhood) into downtown Princeton, before and after closure of Alexander St in 2019 (click to expand)

It is slightly surprising that delays caused by the Alexander St bridge project are so small. Even after closing one of the busiest roads in Princeton, many commuters are not seeing big differences in travel times, and those who are impacted are usually experiencing delays of 3 minutes or less. People are still definitely experiencing bad traffic at rush hour, but most of that traffic was there before Alexander St closed. One possibility is that drivers were mostly able to adapt to the closure of Alexander St, by adjusting their route, or the time they drove to work, or even by switching to transit. Mayor Lempert, and other officials from the town worked extensively with the state department of transportation and local business leaders to try to help drivers cope with the closure of Alexander St.

Although our study rules out the idea that the Alexander St road closure caused widespread, crippling delays, it is possible that there were significant traffic impacts for a subset of trips into or out of town. For example, anecdotally, delays in the evening rush hour have been worse than in the morning rush hour. A broader survey based on real-time traffic data might reveal such a difference. Shortly before it was disbanded by Council, the Princeton ‘Complete Streets Committee’ was exploring such approaches with traffic expert Dr. Thomas Brennan. We also don’t yet know if there has been an increase or decrease in crashes since Alexander St closed. This will require a study of accident reports before and after the construction project began, for all roads leading into Princeton. But for the most part, the closure of Alexander St has been a challenge that Princeton seems to have taken in its stride. As the chief of police now says, “the overall traffic volume impact on our local roads has not been as bad as we expected”.