Posted on September 22, 2017 by walkableprinceton 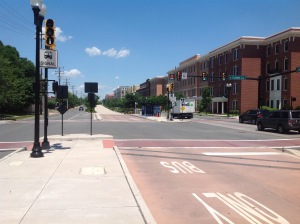 New Jersey Department of Transport (NJDOT) recently allowed cars to drive on shoulder lanes on part of US-1, a key highway in Central New Jersey which runs past Princeton and connects local towns like West Windsor, Plainsboro and South Brunswick. Allowing car drivers to drive on the shoulder lanes is intended to ‘reduce rush hour congestion’. But this new traffic alignment is quite different to what was proposed by a joint NJDOT-Rutgers University study in 2010. This ‘US-1 Growth Strategy’ envisioned  ‘growth centers’ in the Central Jersey region, which would allow green space and existing neighborhoods to be protected, and which would be linked by a new ‘Bus Rapid Transit’ system on Route 1. This ‘Bus Rapid Transit’ (BRT) has not been built – instead, we are expanding lanes for cars. But in Virginia, BRT was built, so we can see how it would work.

The ‘Metroway‘ bus system opened in 2014, connecting Arlington, VA and Alexandria, VA, two towns in the suburbs of Washington DC. As in Central New Jersey, US-1 runs through these towns (in fact, it runs the entire length of the US east coast!). But like in New Jersey, it can suffer from bad traffic here. To improve transit options, an improved bus service was launched. A key feature of this bus service is that it runs for much of its route in a dedicated busway, which is located in the center (median) area of US-1 (see pictures above and below). That means that the bus can glide past traffic, offering a way to move lots of people quickly between points on US-1. The bus stops are also in the center of the road, and have upgraded shelters and real-time arrival information ot let you know when a bus is coming. 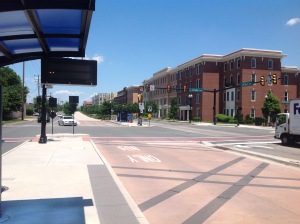 The total number of lanes on US-1 in both places. In the South Brunswick area, we are now dedicating 3 lanes in each direction for car traffic. In Virginia, they are offering two lanes in each direction for cars, with one lane in each direction reserved for buses. As buses are higher capacity vehicles, they can move more people, more quickly, from place to place than is possible on a highway congested with traffic. The presence of the upgraded transit line also makes US-1 in Alexandria and Arlington a logical place to put new housing. As can clearly be seen from the photos, there is a great deal of new development along the busways. New Jersey towns are also set to add much new development, but they aren’t sure where to put it. This has resulted in disputes over redevelopment, such as at the Howard Hughes site (formerly American Cyanamid) on US-1 in West Windsor.

In principle, US-1 is a good place for new housing, because it is easy to connect it to existing towns in the region and toward New Brunswick and Trenton. There are also many businesses, stores and workplaces along Route 1. But without improved transit, new housing on Route 1 is only likely to worsen congestion. US-1 in the Princeton area is statistically one of the most dangerous highways in New Jersey. In contrast, the ‘Metroway’ bus system is surpassing ridership expectations and is considered a success.