Posted on September 10, 2014 by walkableprinceton 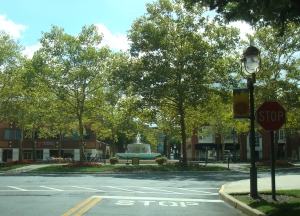 People looking for a place to live in the Princeton area that is walkable to stores and restaurants will soon have a pretty great new option. The management company of Princeton Forrestal Village, located in Plainsboro just off Route 1, have announced that 394 new apartments will be added to the site.

Forrestal Village was developed in 1986 and named after James Forrestal, whose achievements included being the first Secretary of Defense and editor of ‘The Daily Princetonian’. But Forrestal Village has struggled since its construction. On its Wikipedia page, it is listed as a dead mall. That label is a bit harsh, but as one manager said (via NJ.com) “It has really never been successful, and it has never really realized its vision”.

The development is ‘mixed-use’, but that mixture of uses has never before included housing. (Is housing not a key feature of a ‘Village’?) That means that getting to the stores and offices of Forrestal Village almost invariably involves using a car. Adding homes into the mix will allow people to live and work on the site. And that could be a pretty nice option, because the landscaping and layout of Forrestal Village is really nice. The different stores are arranged around a traditional-style downtown, quite different from the dreary strip malls that are so common around Central Jersey. There are some nice stores and coffee shops, but the place can be eerily quiet, especially at weekends when the offices aren’t busy. New residents will help avoid the ‘ghost town’ feeling.

A reinvigorated, truly mixed-use Forrestal Village could in turn could be a model for reinvigorating some of our other moribund local strip malls. It might also mean that some people will be able to live where they work, and avoid adding to hectic Route 1 traffic.

Would you live in a Route 1 apartment complex? Would apartments at Forrestal Village be more attractive than other local options? Let us know in the comments section.