Posted on September 11, 2014 by walkableprinceton 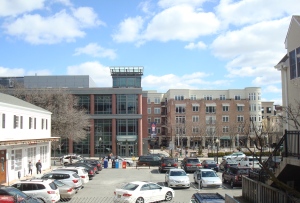 View of Princeton Public LIbrary and Hinds Plaza from the ‘Residences At Palmer Square’, one of several downtown living developments highlighted by ‘The New York Post’ in a recent article about Princeton. (click to expand)

One realtor quoted in the article had this to say about people who were moving to downtown Princeton:

Among them are a number of ex-New Yorkers looking to downshift while maintaining a relatively urban lifestyle. “We see couples and singles coming out of Manhattan and the boroughs and being accustomed to the city lifestyle and choosing to be in town,”

In general, homes that are walkable to stores and amenities are described as selling at a premium, confirming a market prediction from housing expert Peter Shiller. The ‘Post’ even managed to find some people who have made ‘The Residences At Palmer Square‘ their home. The luxury townhome complex is seen by many Princeton residents as a white elephant, but has quietly been filling up with residents who can afford the units, which start at $1.3 million. This is further evidence that in-town living is greatly in demand, but as the article notes, property prices are extremely high, with the average property selling for just a smidgen less than a million dollars ($980,234, to be exact).

Still, the ability to combine an urban scene with a small-town environment is key for many buyers, who place a huge value on walkability. As one recent newcomer said,

“A city-living environment was appealing to us…We knew we wanted to be right in town where we could just jump out and get a quart of milk in the morning or go to dinner without having to get in the car.”

Walkability is clearly an essential factor for people deciding where to live.

How much is walkability worth to you? Would you be willing to pay the ‘Princeton Premium’ to be able to take advantage of the amenities of downtown Princeton? Let us know in the comments section below.