You’re Not Imagining It: Princeton Really Is Getting Wetter

After a very wet April and May, Princeton residents might be asking “why is it always raining??” According to data from the Office of the New Jersey State Climatologist, the answer is clear: it’s Climate Change. Last year was the wettest fall on record in New Jersey, and rainfall totals are well above average throughout Central and Northern NJ in the last couple of months. According to Sustainable Princeton’s recently-published Draft Climate Action Plan (read it here), average temperatures in Princeton are now 4 degrees higher than they were back in the day.

The extra warmth means extra moisture in the sky. And that means more rainy days with kids stuck indoors, more people calling for help after their basement floods, and more vicious mosquitos. People are already complaining that their basements “never used to flood”. The rainfall data show that part of the reason is that it is just much wetter now, and the wet years are really wet. All the extra rain is even causing higher taxes. Increased sewer charges, caused by increased water run-off, was highlighted by town administrator Marc Dashiell as a key driver of increased costs in the 2019 Princeton municipal budget. 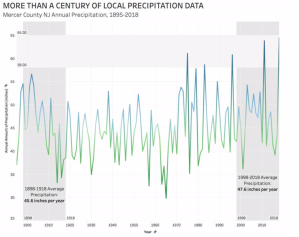 Rainfall has been increasing in recent years in Princeton, and the wet years are really wet. (Chart from Princeton Climate Action Plan, click to expand)

Climate change is often presented as a potential catastrophe, and it probably will be a catastrophe for polar bears and coral reefs, which are likely to disappear in our lifetimes if current trends continue. But in Princeton, climate change is more likely to cause a bunch of annoying and costly problems. Like an aching tooth, climate change is a problem that we’re going to have to do something about sooner or later. Fortunately, the Princeton Climate Action Plan presents a realistic path for the town to prepare for the risk of further climate change, and to reduce our contribution to it. That means improved management of stormwater and protection of green spaces, but also an increased emphasis on walkable housing and clean transportation. Many of the proposals have added benefits, such as increasing equity, economic vitality, and public safety. 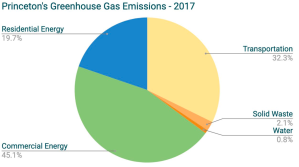 The dozens of volunteers who wrote the draft Climate Action Plan analyzed the sources of carbon emissions in Princeton. Transportation makes up a huge chunk of greenhouse gas emissions. Wiser land use and a shift toward electric vehicles and bicycles will help to reduce this source of pollution. Residential and commercial energy makes up an even bigger share of carbon emissions in Princeton. The Climate Action Plan proposes a very interesting, novel solution: a ‘Community Solar‘ project. Based on a New Jersey law passed last year, Community Solar would allow Princeton residents to get clean electricity generated from the sun delivered to their homes at no extra cost. Solar panels on roofs would not be necessary, because the panels would be located somewhere else. This seems like a fairly painless and potentially impactful way to reduce greenhouse gas emissions.

Of course, implementing the plan will take a lot of effort, and it’s not clear whether local residents have any interest in change. The recent reforms to street parking downtown caused such a fuss that it’s hard to imagine how the town could take the much bigger steps required to deal with a problem like climate change. By taking an interest in this issue, however, the problem-solvers in the community might steer us to sustainability.

The public comment period on the draft Princeton Climate Action Plan runs through May 31, 2019. Comments can be added to the plan at this link.