Posted on November 9, 2015 by walkableprinceton 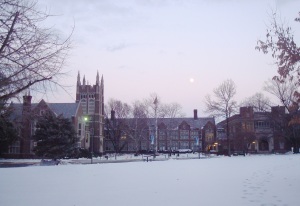 Princeton voters were among those casting their votes in an election on November 3 last week. By now the results are clear, with most incumbents being returned at County and Council level, and Andrew Zwicker (D) set to score an upset by unseating Donna Simon (R) for the 16th NJ Assembly seat. Here are three stories ‘behind the headlines’:

Three seats were up for grabs on the Princeton School Board, and were contested by incumbent Pat Sullivan and three challengers. During the campaign, Robert Dodge, challenging, promised to use his position on the Board to put the brakes on new housing in Princeton, arguing that any new students would put unreasonable strain on school budgets. This is an argument that comes up regularly in Princeton when new construction is under discussion, so it is to Mr Dodge’s credit that he gave local voters an option to put an anti-growth candidate on the Board. But Princeton voters spurned his agenda, leaving him with a fourth-place finish, hundreds of votes behind his nearest rival.

Earlier this year, incumbent Hopewell Township Mayor Harvey Lester switched from the Democratic Party to become a Republican. His decision was based on his perception that Republicans were more likely to ‘hold the line against development’, in a municipality that is under pressure to address a decades-long backlog in construction of affordable housing. Lester was critical of several failed proposals to build affordable housing in Hopewell Twp, but his stance earned him little payback from local voters. Julie Blake was elected in his place, and will now have to address the township’s affordable housing deficit.

The question of who will represent Princeton in the NJ Assembly has gone to the wire. After the initial count, all four candidates were locked on about 25% of the vote. Andrew Zwicker (D), an educator at Princeton University’s Plasma Physics Lab, looks set to replace Republican Donna Simon at the Assembly Chamber in Trenton. Jack Ciaterelli (R) appears to have hung on at the expense of Democratic challenger Maureen Vella. Zwicker’s vote share in District 7, which covers the student residence parts of Princeton University’s campus, was about the highest of any electoral District in the town. But with just 53 voters, it was also, by far, the worst turnout. Numbering over 8,000, Princeton University students could tip the balance in more local elections, but they just don’t seem interested. 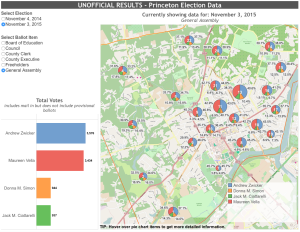 Princeton election results. Size of pie chart is proportional to participation in each district. (click to expand)