Princeton Named “USA’s Best Small City”. But Is It Really A City?

Posted on November 5, 2015 by walkableprinceton 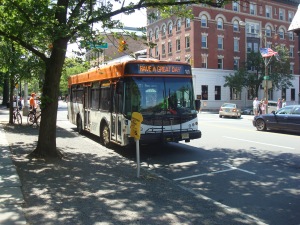 Tiger Transit bus at intersection of Nassau Street and Witherspoon Street, center of the ‘Best Small City’ in the USA. (click to expand)

Princeton was named ‘Best Small City’ in an online survey this week, following on from another recent analysis that named it ‘Best College Town To Live In’. Although these online polls shouldn’t be taken too seriously, it’s great to have attention focused on the good things that are happening in Princeton. On the other hand, the survey gave Princeton a terrible score for ‘affordability’, placing 1,144th out of all the cities considered.  Princeton  is increasingly becoming too expensive for average families. The other point that could be controversial is the use of the word ‘city’ to describe Princeton. Some residents hate the idea that Princeton is ‘becoming a small city‘ Is Princeton a city? And does it matter?

There are no generally accepted criteria to distinguish a ‘city’ and a ‘town’. In the case of the recent survey, any place with a population between 25,000 and 100,000 was a contender for ‘Best Small City’. Princeton has a population of about 30,000, so it would certainly count. Officially, Princeton is never described as a city, partly because in New Jersey, ‘city’ refers to a particular type of municipal governance. Official documents usually talk about the ‘municipality’ or ‘community’. If the definition of a ‘city’ is a subjective matter, why do people get annoyed about the idea that Princeton is a ‘city’? From day to day, it doesn’t make any practical difference what we call Princeton.

Even for planning matters, it is irrelevant whether Princeton is called a ‘city’ or something else. Planning should be based on specific needs, not semantics. Clearly, one need right now is to deal with the affordability problem, which is a big negative affecting the town/city/place. Hopefully we can achieve that, to ensure that Princeton is still recognized as the best place to live in years to come.