Posted on November 7, 2014 by walkableprinceton 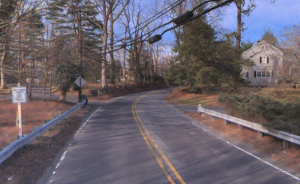 Cranbury Road (CR615) in West Windsor. Note the complete lack of sidewalks or bike facilities in the current condition. (via Bing Maps, click to expand).

West Windsor Township has been having a big public discussion recently about improving Cranbury Road, which is Mercer County Road 615. This discussion has been brought about by a brave and organized bunch of local residents, who are determined to see safety improvements. They persuaded the West Windsor authorities to commission a report to see what design alternatives could work to add safe walking and cycling facilities along CR615 in West Windsor. The report was subsequently published, outlining a number of different alternatives, which would have provided different amenities, and carried different costs in terms of both money and right-of-way.

Several of the options included bike lanes, which would be a great option for cyclists to give them safe space away from the large volume of traffic which rushes along CR615. But the final recommended plan, the so-called ‘hybrid alternative‘ contains no facilities for cyclists at all. It does contain sidewalks, which is a big step forward, but the ‘Complete Streets’ policy adopted by both West Windsor and Mercer County calls for streets to be made safe for all users, not just certain groups. The ‘hybrid alternative’ seems to completely miss the mark for cyclists. This is really, really, really, really, disappointing, because West Windsor is usually very progressive when it comes to accommodating cyclists. It was a ‘bike-friendly community’ long before Princeton, and West Windsor is home to a great number of advocates who have pushed for better bicycle facilities.

West Windsor, and Mercer County promised to do better than this, and local residents deserve better than this. Below is my letter to West Windsor engineer, Brian Aronson, who has requested feedback on the Cranbury Road plan through the end of today, Friday, November 7. As a Princeton resident, I’m a little reluctant to be commenting on something that is happening in West Windsor, but this is a Mercer County road that is paid for by all of us, and intended to support all our transportation requirements. The last generation dumped us with a bunch of bike-unfriendly roads, which make car use seem essential to many people. The least we can do is try to design roads that are safe for everybody in the next generation. If you want to send Mr Aronson your own message, his email can be found at this page on the West Windsor Township homepage.

I examined with interest the proposed ‘hybrid concept’ for CR615 (Cranbury Road) in West Windsor.

As you are no doubt aware, Mercer County and West Windsor have adopted Complete Streets policies, requiring that road designs should be accommodating to safe use by all users, including pedestrians, cyclists, transit users, and motorists.

The proposed ‘hybrid plan’ for CR615 is a step forward in that it provides sidewalks for pedestrians. On the other hand, this plan has no safe accommodations for cyclists. As such, it is not compliant with Complete Streets, or previous motions passed by WW Township envisaging safe accommodations for cyclists traveling between the Township and Plainsboro. This is very disappointing, because Cranbury Road is presently a hazardous place to cycle. The public discussion on Cranbury Road included consideration of plans that would have provided proper cycle facilities. These plans appear to have been discarded in spite of the Township and Mercer County’s stated adherence to the principles of Complete Streets.

Given the deficiencies of the ‘hybrid plan’, I find it impossible to support. As a Mercer County taxpayer, I have to insist that the County’s Complete Streets policy is properly implemented. There are many projects that the County could be undertaking to advance Complete Streets, and unfortunately this redesign of CR615 is not one of them.”