Report: New Jersey Is Second-Worst State In The Country For Housing Cost

Posted on February 24, 2014 by walkableprinceton 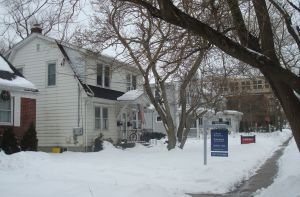 A home for sale in Princeton. Princeton and New Jersey are responsible for some of the worst housing costs in the country. (Click to expand).

Depressingly, the most vulnerable households are those that are most likely to be caught in the trap of high housing cost. The report found that renters are more than twice as likely to face a severe cost burden than homeowners. Residents of low income are far more likely to be affected. It’s a terrible situation, because, as the report notes, “stable and affordable housing is a platform for positive family and community outcomes.” Expensive housing imposes stress on families, and is a drain on our local economy. When so much money is being dedicated to paying rent or a mortgage, hardly anything is left for the local merchants that we love. Expensive housing is crushing our small businesses, and only bankers and landlords are profiting.

The figures should be a wake-up call for policy-makers. We desperately need to improve housing availability. This may require action at the State Assembly level, because local municipalities are ducking their responsibility to help fix the housing crisis. Princeton in particular has resisted adding housing for decades, leading to a minimal population increase even as the local economy has grown substantially. We’re not the only town on this anti-growth bandwagon. Robbinsville residents fought tooth and nail to avoid  new home construction in their town, and many other towns play the same game. Everybody apparently lives in an extremely-fragile neighborhood, which would be “destroyed” if new residents came to live there. Everybody has a school system which would be “over-burdened” by incremental growth in the student body.

These excuses and exercises in buck-passing must stop. Jersey is about to become the national leader in unreasonable housing costs. Is that a title we want?

Why do you think housing is so expensive in New Jersey? What could be done to lighten the load of housing expense? Let us know in the comments section below.

2 Responses to Report: New Jersey Is Second-Worst State In The Country For Housing Cost