Posted on February 25, 2014 by walkableprinceton

Remember the ‘good old days’, when if you wanted to watch a movie at home, you had to go round to a store and rent out a book-sized ‘videotape’? It was pretty expensive and you had to pay extra if you were one day late bringing it back? Crazy, right…why didn’t we just watch it on Netflix? Well, that’s what we do now, and that’s why the West Coast Video store at 259 Nassau Street has been shuttered for years. But new life is coming to the site in the form of…a 7-11 convenience store! Are you excited? The online consensus (as seen at Princeton’s primary online news forum, ‘Planet Princeton’)  is that a new 7-11 is “an opportunity lost” or just plain “awful”.

Let’s look on the bright side. A 7-11 is definitely better than a vacant building. The old West Coast Video site has been a hole in the fabric of one of Princeton’s most walkable neighborhoods for years. Some of us might prefer something a little fancier than a 7-11, but lots of regular folks will appreciate the ability to get regular-priced products. Organic milk from local dairies is already available nearby (Nassau St. Seafood & Produce)…Whole Earth Center is footsteps away, and a variety of unique blended kale products will soon be available on East Nassau. It’s OK to have one ‘normal’ store in the mix, and a 7-11 will be very convenient for many area residents to access by walking.

Here’s what would be even better: a proper, mixed-use development. 7-11 may be famous for its extended opening hours, but a mixed-use site is active 24/7. With apartments or condos above retail on the ground floor, the site would never lie empty. A mixture of uses would capture the maximum value for the town in terms of increased ratables, and would make full use of an infill site- something that is particularly important in a State where our few remaining green spaces are at risk from development. A proper infill redevelopment, just like the current proposal for the 255 Nassau Site next door, would be the best use of the old West Coast Video Site. 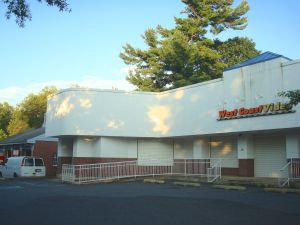 Robert Bratman, who co-owns the West Coast Video site, made it clear at a Princeton Zoning Board meeting last fall that he had no interest in a major redevelopment of the plot. As a property owner, he should absolutely have the right to choose what to do with the site. A 7-11 is not a bad use. It may under-utilize the site and it doesn’t do anything to help Princeton’s desperate shortage of housing, but nor does it preclude a more productive use in future. The existing building is also pretty ugly. But at least it will finally be in use again. And are you not curious about the 7-11 menu item described online as “a concoction you would have had to dare your grade school friends to eat“???

How do you feel about a new 7-11 in Princeton? Is it good to have a new, walkable convenience store? Do you think you will use it? And will you try the ‘1/4 pound Cheeseburger Big Bite’? Let us know in the comments section below!!

This entry was posted in Affordability, Downtown Vibrancy, Princeton and tagged 7-11, Princeton, walkable. Bookmark the permalink.