Posted on November 21, 2013 by walkableprinceton

Princeton University has doubled-down on signs around the Arts & Transit construction site. (Click to expand.)

Construction of Princeton University’s ‘Arts and Transit‘ project has vexed people commuting by car into Princeton along Alexander Street, and sparked revolt from fans of the Dinky train line. But we haven’t heard much about pedestrians along Alexander Street. For many students and local residents, their regular walk to work or class has been transformed into an ever-changing magical mystery tour of diversions, fencing and a remarkable array of signage (see photo above).

No, it’s not Gitmo- this is a section of the construction zone along Alexander Street. The old Dinky Station is in the background. See below for what it used to look like. (or click to expand)

The local area is transformed. If you’re a student living at Forbes or the Lawrence Apartments, this is probably not how you imagined Princeton to be!!! You probably had something like this in mind:

The same area of University Place, at Princeton Reunions Day earlier this year. The Fences came soon after. (click to expand.)

At times the arrangements for people trying to walk to and from the new, temporary Dinky station can seem downright hostile: 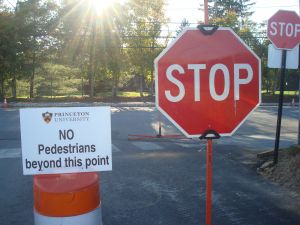 To be fair to the University planners, they have gone to a lot of trouble to try to direct people walking along their infamous, ever-changing ‘temporary walking path’. At times there are so many signs, that it is as if somebody in the Office of the University Architect  was getting paid on a piece rate per sign: 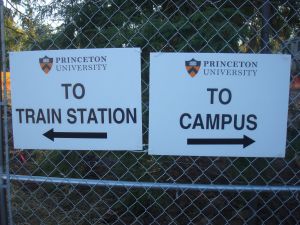 Plenty of signs…(click to expand.)

The sign for the Wawa is in special red lettering, to appeal to the frazzled student in need of sustenance. (click to expand.)

Princeton University even hired some friendly traffic crossing patrol guys, to assist people trying to find their way to campus along the University Place construction zone! 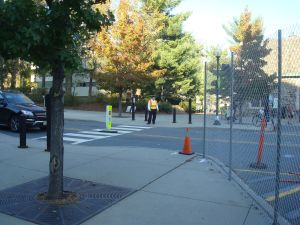 Crossing patrol at the old Dinky Station near the Arts and Transit Construction Zone. (Click to expand.)

It’s pretty crazy to think that the class of 2017 will spend their entire time at Princeton with the Arts and Transit construction project going on around them. (Construction is not expected to finish until Fall 2017.) The good news is that the detours around Alexander Road and University Place are expected to be complete much sooner than that. It seems hard to believe right now, but the University is projecting that a new train station, Wawa and access road will be completed by summer of 2014. Those of us in the town who just got our Robeson Place sidewalk back after years of construction at Palmer Square North can vouch for the pleasure in having things back to normal after a long snarl-up like this!

Update 1- The ‘Daily Princetonian‘ has an article: ‘In Defense Of the Alexander Street Construction Maze‘, also published today. Well worth checking out!

Update 2- ‘Bike Princeton’ are reporting that the Arts and Transit detour has also brought a ban on cycling on the roadway on Alexander Road. Is that fair? Find out more here.

Are you affected by the ‘temporary walking path’ along Alexander Street? Do you think the University is doing all it can to make life easy for pedestrians who have to detour around the construction site? Do you think the arrangements are safe? Have your say in the comments below!