Posted on March 12, 2013 by walkableprinceton 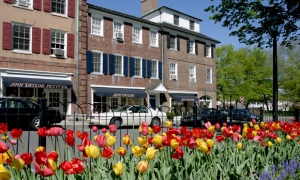 Palmer Square, at the heart of downtown Princeton, offers a mixture of stores, boutiques, restaurants, and condominium homes-among much more-all centered around an attractive park-like square. Loved by almost everyone in the community, walkable Palmer Square is listed as the second-most important Princeton attraction (after Princeton University) by visitprinceton.org.

The dream of businessman Edgar Palmer (Princeton, class of 1903), Palmer Square was anticipated to cost $10 million, a fortune at the time. Construction began in 1936, and Palmer Square officially celebrated it 75th anniversary in 2012. It could be said that Palmer Square is still a work in progress, with construction still ongoing at the Palmer Square Residences.

Many of the basic principles of Smart Growth, that is, mixing residential and retail uses, increased density, and a layout that favors walking, were present in the design of Palmer Square. As such, compact walkable development is not really a new concept, but a return to traditional land use as promoted by Edgar Palmer in the 1920s. The popularity of smart growth in contemporary development reflects the success of mixed-use developments such as Palmer Square in the past. As said by David Newton of Palmer Square management at the time of Palmer Square’s 75th birthday:

“Everyone is basically doing Palmer Square today. The concept of residential, retail, hotel, office, parking — all combined together for the benefit of the entire community — instead of being the exception, it’s now the norm.”

Palmer Square under construction in 1939

Despite the success and overwhelming popularity of Palmer Square today, it is important to remember the cost associated with its construction. As described here, a residential community of African-American Princeton residents was forcibly relocated to make way for the new construction. Residential homes in what was then Baker Street were separated, and rolled on logs up Witherspoon Street to what is now Birch Avenue. This is perhaps the most famous example of the Princeton tradition of relocating houses, which, as we described yesterday, may continue if Princeton University can find somebody willing to haul off their surplus houses on Alexander Street.

Homeowners nowadays quite rightly have the law on their side in preventing having their homes demolished or carted away to make room for a developer’s project. However, it is worth bearing in mind in the context of some of the bitter current battles to prevent development in Princeton, that without the vision and hard-hearted drive of Edgar Palmer, our much-loved downtown center would not exist today.