Posted on March 11, 2013 by walkableprinceton 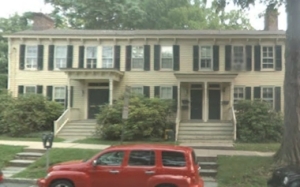 By now, you have no doubt heard that Princeton University is giving homes away for free. To prepare the site for their new ‘Arts and Transit Neighborhood’, the University wants to get rid of six houses along Alexander Street. This has been widely reported in local media. Considering that online real estate company Trulia reported an average listing price for Princeton homes of $962,000 for the week ending Feb 27, 2013, this house giveaway appears to be one of the greatest opportunities of all time! Of course, there is a catch. In fact, there are a couple of pretty serious issues. The first is that the homes are not in great shape. But the major problem is that you have to pay the costs of hauling the home away. That might be as much as $100,000. Add in the challenges of actually finding somebody with the know-how to relocate a house, plus getting the necessary permits, and it isn’t such a big surprise that there are no takers for these houses right now.

Is it completely crazy to think about moving an entire house? As we will examine in future posts, Princeton has quite a tradition of moving homes, so it is not as strange as first impressions would suggest. However, this local story has gone right around the world, as newspapers and TV stations have marveled at the possibility of getting a historic Princeton home for free!

Here is a selection of national news reports from different outlets on this story:

Princeton University giving away 7 houses, but with a … – Fox News

And that’s not all: here is how the story was reported in England, in Germany, in Cambodia, in New Zealand, and in South Africa (video)!

It would be nice if these historic homes could be kept in Princeton, but given the international interest it is just as possible that they could end up on another continent!

This entry was posted in Affordability, Local, Princeton, Real estate. Bookmark the permalink.