Posted on February 28, 2021 by walkableprinceton

Rendering of proposed mixed-used redevelopment at Griggs Corner in Princeton. (click to expand)

Earlier this month, Princeton’s Site Plan Review Advisory Board considered a redesign of a mixed-use building proposal on Witherspoon Street at Hulfish St (map). The site in question is ‘Griggs Corner’, a one-quarter acre lot that was formerly used as a gas station and has been a surface parking lot for several decades. The original application, for a mixed-use development containing ground-floor retail and eight apartments, was submitted by Palmer Square Management last June (report from Walkable Princeton). There was concern at the time that the new project would stand too close to the Elements / Mistral restaurant on the north side of the site. The new design aims to address this issue, by re-orienting the building on the site.Architect Josh Zinder presented the plan for the applicant. He described how the proposed development would add new residential options at the heart of downtown Princeton.

The site is extremely close to downtown jobs and amenities, providing an option for people who want to live in an active area, with less dependence on a car. An infill redevelopment like this has the potential to reduce demand for housing at undeveloped sites in rural areas. Conflicts between pedestrians and cars would be reduced by eliminating the curbcut on Hulfish St which is used by drivers to access the surface parking lot. The project would be built to LEED Silver specifications, with porous pavement and a ‘green roof’.

Walking distances from the site to downtown Princeton destinations. (click to expand)

Specifically, the redesigned project would move a dumpster area to the alley between the new building and the restaurant. The dumpsters would be screened off from view by fencing. 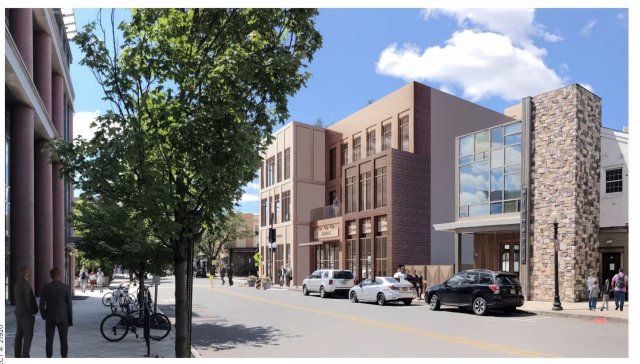 Street level rendering of the proposed project, opposite Princeton Public Library. The redesign provides more space between the new building and the Elements/ Mistral restaurant seen at the right. (click to expand)

Parking for the new apartments would be in existing Palmer Square garages. Lori Rabon, Vice-President at Palmer Square Management, testified that the garages would have ample parking to meet the requirements of the new development. Local businesses may nonetheless regret losing the surface parking lot, which regularly fills with vehicles.

The new building as it would stand in context on Hulfish St. (click to expand)

Board member Marina Rubina also queried why the proposal included no affordable units. The original application had envisaged a family apartment elsewhere in Palmer Square being dedicated as a below-market-rate unit. The applicant’s attorney confirmed that this was not part of the current proposal, because it was not required by municipal ordinance. Council Member David Cohen seemed shocked and surprised at this, but it turns out that the town’s inclusionary zoning ordinance was amended as part of the recent housing settlement. Consultants for the town believe that it is not possible to apply an inclusionary zoning requirement to an as-of-right project such as this. Only projects that involve variances or density bonuses can be made subject to inclusionary zoning provisions. 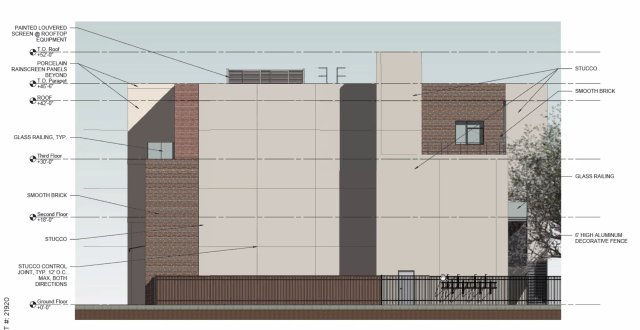 Side wall of proposed development, which would face the Elements / Mistral restaurant. (click to expand)

Board member Louisa Clayton was unenthusiastic about having the dumpster area adjacent to the Elements / Mistral restaurant. Architect Josh Zinder replied that there was no other way to lay out the building to meet the ‘programmatic needs’ of the development. Marina Rubina suggested that it would be better if the space between the new development and Elements / Mistral could be broken up with small storefronts, similar to the alleyway next to the “Alchemist and Barrister” bar. She described it as “”a bummer to have space for garbage in this walkable area”. A further redesign of the plan to accommodate this suggestion may require a variance however, which would make the proposal subject to the town’s affordable housing requirement. As things stand, the project meets all zoning requirements, and can potentially be approved as-of-right. That approval will depend on a decision by the Planning Board later this year.

The full site application is available on the Princeton Planning Department website or here.

This entry was posted in Uncategorized and tagged architecture, planning, Princeton, sustainability, Walkability. Bookmark the permalink.