The Progressive / Liberal Case for Building Much More Housing In Princeton

Posted on June 8, 2015 by walkableprinceton 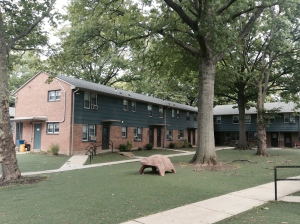 Can Princeton Democrats take responsibility for adding new housing in Princeton? Based on a letter in last week’s ‘Packet’, it seems that the tide may be shifting toward a realization that more housing is necessary and even desirable. The letter, from longstanding PCDO member Anne Neumann, offers a useful range of solutions on the question of affordable housing, but strays into a partisan framing of the debate on expanding housing opportunity:

“Republicans argue that zoning and other building regulations constrict supply and drive up costs, so we should eliminate regulations. Then the free market will build housing for both high- and low-income households….”

Although some Republicans favor allowing the market to run its course without excessive
intervention from governmental bodies, the G.O.P. is also home to reactionaries, Social Darwinists, and the Agenda 21 people; all of whom are quick to find reasons to oppose building new homes. Locally, Hopewell Township Mayor Harvey Lester jumped ship from the local Democrat party that had helped elect him, in favor of the Republicans, who he reckons are less likely to favor new development.

Democrat-run towns also have a tendency to under-build, leading to infamous housing shortages in places like New York, San Francisco, and also Princeton. But when housing is in short supply, it is always the least well-off who get squeezed out. The shortage has arisen, in part, because of a liberal tendency to see new housing as an attack on the existing community, perpetrated by the infamous ‘greedy developers’.  Yes, developers want to make a profit, but they are no greedier than every other business that sells something that people want to buy.

In the past, as the economy grew and land values increased, Princeton allowed developers to build more intensively. Hence, today’s residential neighborhoods replaced the farms, which had replaced the forests and wilderness. By dividing valuable land between more people, a developer gives more people the chance to own a share in a community. If Democrats are interested in creating access to jobs and education, this is a process to celebrate, especially because we know (thanks to the work of Douglas Massey, of Princeton University), that there are few things more able to lift people out of poverty than living in a community of opportunity.

Permitting new housing in Princeton also offers a chance to ensure that new homes are built to the highest environmental standards and in places where transit and active transportation can work. As a matter of leadership on climate change, Democrats should step up to the challenge of meeting housing needs. It is always a challenge, because new housing eventually means new pressure on existing amenities. But these challenges are over-stated by those who present our town as a fragile snowflake. We have met these challenges in the past, and we can meet them in future, with the innovation and ingenuity that can be expected from a town like Princeton.

Around the nation, people who might describe themselves as liberals and even left-wingers are coming round to the idea that to make homes affordable to everyone, we need to make room for many more homes. In New York, Mayor de Blasio’s housing plan envisages substantial new construction. More homes should be provided by non-profit agencies, corporations, and small developers, if we are going to meaningfully address the affordability crisis. Saying this doesn’t automatically make somebody a ‘corporate shill’ (as is inevitably heard when a contentious planning debate is taking place). It is a simple statement of commitment to expanded housing opportunities for everybody. Increasing supply is not just a matter for Republicans, but for Democrats as well, and that’s a relief in these days of partisan trench warfare.

Princeton is currently revising the municipal Housing Element of the municipal Masterplan to take account of recent court decisions regarding affordable housing. How much housing should the town aim to build between now and 2015? And what are the main issues with new construction? Have your say in the comments section below!

This entry was posted in Affordability, People, Princeton. Bookmark the permalink.