Posted on February 12, 2014 by walkableprinceton

Tent Rock in Woodfield Reservation in Princeton (Click to expand.)

The Woodfield Reservation is one of the largest tracts of preserved land in Princeton, but the trails are very lightly walked. The park is at the very edge of Princeton, between Great Road and Drakes Corner Road. Visitors often look for two large boulders along the trails.The first is Tent Rock, shown above, a fun rock to climb on (although probably not right now, when it’s covered in snow and ice.

The other is ‘Council Rock’. Council Rock is the most prominent of a number of stone outcrops along a ridge in the park. Standing on top of the rock feels like you are giving a speech to a council of trees, as the forest below opens out like a natural amphitheater.  Although it’s not going to rival the Niagara Falls as America’s top tourist attraction, it’s a moderately interesting target for an afternoon’s walk. 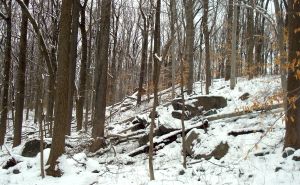 Council Rock in Woodfield Reservation (in the middle of the photo, with the flat top). (Click to expand.)

There’s a good write-up about the rocks of Woodfield Reservation at Hiddent Trenton which you can find here.

Have you been to Woodfield Reservation? Is it worth the trip? Let us know in the comments below.

This entry was posted in Beautiful Walkable Princeton. Bookmark the permalink.