Most Of Princeton Is Pretty Much Fine With The AvalonBay Redevelopment

Posted on February 7, 2014 by walkableprinceton 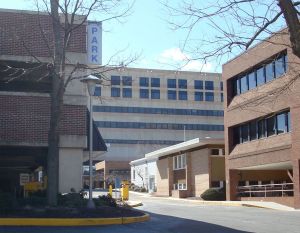 “I’m still standing-yeah yeah yeah”…the old hospital has been lying derelict for months as Princeton argues about a redevelopment that most people think is a perfectly good idea. (click to expand.)

Princeton municipal officials are poised to spin through the doors of the Mercer Superior Court in Trenton once again as a new set of local residents petitions against the decision to build apartments on the old Princeton Hospital site. Tens of thousands of dollars have now been spent on attorney fees, to defend the municipality and Planning Board against resident law suits and court actions objecting to the plan. But what does Princeton really think?

Last year, we felt obliged to take issue with the residents who vociferously opposed the AvalonBay plan. The proposed apartments are- at  the highest point- half the height of the old hospital tower. Princeton also has a serious lack of homes near the downtown activity center where many people work and socialize. The location is an excellent site for compact infill development, with a bus stop right in front and many stores and businesses in walking range. It’s true that the new buildings are larger than neighboring houses, but those houses were built in the 1950s and 1960s. To build suburban-style housing a 10-minute walk from downtown Princeton in 2014 would be to ignore the pressures of traffic and sprawl that have intensified in recent decades as a consequence of an over-reliance on spread-out, low-density housing.

But the bigger question is: who really cares? What would happen if you went out in the street and asked a  random bunch of local residents what they thought about the AvalonBay proposal?

Last July, ‘Town Topics’ did exactly that. As part of their ‘Question of the Week’ series, they asked a bunch of people “Do you think the plan for the hospital site is a good or bad idea.” Of the seven responses printed, five were in favor, with just one against, and one respondent asked for a playground for kids and dogs. (Good news-  a playground is in the plan!). Several of the respondents noted that it was a good site for housing, and that it is important to bring affordable housing closer to the center of town. The people who, on balance, think the plan is a good idea, are not so enthusiastic that they’re going go to Council meetings and write letters in support. But the idea that Princeton is really angry about the AvalonBay proposal is just not true.

Participatory planning is good when it comes to improving the design of buildings. The current AvalonBay proposal is better than the original plan, and we have to give credit to those who pushed for a more open design. But when the process becomes an exercise in obstructionism, then Council and the Planning Board would do well to keep a sense of perspective. New Jersey can’t keep building housing in exurban sites- it is destructive of green space and it increases the mode share of cars. That means we have to support housing at infill sites like the hospital. Compact, walkable housing is good for municipal finances, good for supporting local retail, and good for increasing the share of active transportation. Neighbors who disagree with this sustainability agenda will protest, but in general, developments like AvalonBay are not as controversial as is often made out.

Do you agree that it’s better to build more housing on the hospital site instead of on local farmland? If not, what local farmland do you think should be built over to keep  low density on Witherspoon Street? Let us know what you think in our comments section! It’s always great to hear what our readers think!