Posted on January 16, 2014 by walkableprinceton 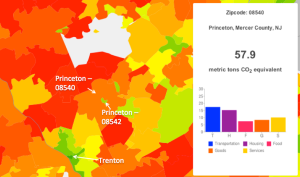 An amazing new tool from the University of Berkeley, California has estimated carbon emissions from every zipcode area in the United States. The goal is to provide information to local government about how they can target efforts to reduce the carbon impact of their local areas.

The data, which can be accessed at The Cool Climate Network website, break down carbon output into five categories: emissions from transportation, housing, food, goods and services. (A full explanation of the methodology is available at the linked website, where you can also find a carbon footprint estimate for your own zipcode.) By  estimating carbon outputs nation-wide, the developers are able to make maps which show carbon output as different colors, depending on the amount of carbon generated in each zipcode area. As shown in the map above, for Central Jersey, areas which produce a lot of carbon are colored red, whereas areas which produce less carbon are colored green.

In each case, the biggest thing contributing to carbon emissions is transportation. Whereas 08542 residents have a transportation carbon output of about 11 metric tons of carbon dioxide equivalent, the figure for the 08540 is 17 tons, and for the 08558 (Skillman) it is 26 tons. On average, Skillman residents are generating more than double the amount of carbon from transportation than residents from the former Princeton Borough. Why? The answer is walkability. In Princeton Borough, many people are able to walk or cycle to work. There is also transit availability- to some extent anyway- with the Dinky, the FreeB, and several NJ Transit bus lines. Many former Township neighborhoods, as we noted last year, are car-dependent. And Skillman? Reach for your car keys if you want to go anywhere.

If we want to reduce car use and the global climate change, we need to take notice of these findings and plan better. The best place for housing if you have any interest in preventing climate change is in the downtown urban core. Walkable parts of Princeton are far-less impactful in terms of carbon footprint than more peripheral areas, because less carbon is used for transportation. As a result, walkable housing in Princeton is the most ‘green’ housing. In the linked paper from UC Berkeley, the authors note “We find consistently lower HCF (household carbon footprint) in urban core cities (40 tCO2e) and higher carbon footprints in outlying suburbs (50 tCO2e)”. Trenton has many well-documented problems, but as a relatively dense, walkable city, its downtown areas have particularly low carbon footprints (see image above).

Transportation is the key problem that Princeton needs to tackle from a sustainability perspective. The biggest source of carbon in the former Township comes from transportation. It’s the biggest problem, but it’s also the problem that Princeton seems most reluctant to face. It’s even worse when we consider where most of the people who work in Princeton live. Right now, much of the new housing that is being built to serve Princeton is being built in ‘red’ carbon zones like Montgomery Township, Princeton Junction, and parts of South Brunswick. That’s not surprising, when Princeton so strictly limits what can be built in walkable areas. Princeton has no business pretending to be a sustainable town if the people who work here are driving from high-carbon areas. We must prioritize walkable housing if we are going to be serious about sustainability.

Are you surprised that so much of Princeton’s carbon output comes from transportation? What realistic initiatives could Princeton take to lessen its carbon output? And why do we incentivize living in places which require car use? Have your say in the comments below…

This entry was posted in Local, Princeton, Sustainability and tagged climate change, Princeton. Bookmark the permalink.