Posted on December 10, 2013 by walkableprinceton 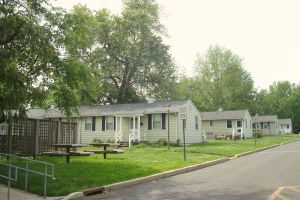 The little cabins of Princeton’s Butler Apartments look set to face the wrecking ball in summer 2014. (click to expand.)

Princeton University is planning to demolish graduate student housing at their Butler Apartments site on S Harrison Street, but not everybody thinks it’s a good idea. Writing in ‘The Daily Princetonian’, University Professor Anthony Grafton expressed disappointment that the University was reducing its provision for housing for graduate students. Meanwhile, graduate students are circulating a petition to keep Butler open, because it provides a large amount of affordable housing.

The controversy has led Prof. William Russel, Dean of the Graduate School, to write defend the University’s housing plan in another letter to the Daily Princetonian. According to Prof. Russel, the Butler housing is outdated, and the University intends to transition graduate students to modern accommodation at the Lakeside development. However, it is a fact that Princeton University does not attempt to accommodate 100% of its graduate students. At least one quarter of the graduate student population is expected to find their own housing in the local private market. University President Christopher Eisgruber, addressing students on Monday, confirmed that providing graduate student housing was subject to ‘trade-offs’ with other University priorities.

Some grads will certainly want to find their own housing anyway. But for many others, the lack of available graduate housing raises the challenge of finding a home in the limited and expensive Princeton rentals scene. Late-stage PhD students, who are at the most challenging stage of their research and who are likely to have the least financial resources, are commonly placed in the situation of trying to find a place to rent in Princeton. Those who balk at the price of rentals are forced out of town, to less-expensive apartment options down by Route 1 or in a neighboring township. In this respect, PhD students suffer the same problem as many local employees on moderate incomes – Princeton is just too expensive for them.

A failure to provide affordable, walkable housing (like Butler) for every graduate student who wants it is a sure sign of a failed housing policy. It is unfair, detracts from the University community, and sustains traffic from graduate students driving in from cheaper homes elsewhere. Comparisons to the housing policies of peer institutions makes little sense, because Princeton is a different environment for renters. The town has a stringent housing masterplan, predicated on ‘keeping the town the same’. This policy is regularly invoked by local residents who don’t want to see new housing in their neighborhoods. Local politicians place tremendous weight on their concerns. One example is the recent decision to reject a plan for a 15-apartment redevelopment of the 255 Nassau site, which could have provided excellent walkable homes for PhD students.

Currently, the University is planning to knock down the Butler Apartments in summer 2014 and leave the site empty. We face having a bizarre situation where – in a town in which everybody complains about traffic and housing affordability – a prime, walkable site sits undeveloped! This absurdity can partly be explained by local zoning, which prohibits redeveloping the site at an equivalent density. The zoning needs to be fixed.  However, this effort could be hijacked by local residents, some of whom are averse to any new housing in Princeton, and some of whom are angry about the University moving the Dinky station and looking for a chance to ‘even the score’.

Princeton welcomed Einstein and ought to be equally receptive to the research practitioners of the present day. The town and University is best served by keeping the whole graduate community close to the heart. The Municipality of Princeton is set to draw up a consolidated Housing Masterplan. This time, we must make appropriate allowance for an expanded pool of walkable housing, which could accommodate graduate students or some of the 22,000 people who drive into Princeton each day to work.

Although closing Butler is part of the University’s present campus plan, it would be wise to extend the life of the housing for several more years until the site can be appropriately redeveloped. Leaving the site vacant risks making future re-use more challenging, as neighbors come to see an empty lot as the new normal. Redevelopment might be similar to the current construction at the Merrick-Stanworth site, but a better model would be the mixed-use ‘Campus Town’ development at The College Of New Jersey. Ewing, NJ is set to realize an annual $395,000 payment for the project, whereas municipal Princeton will get $0 for an empty field at the former Butler site. Encouragingly, Treby Williams, who is overseeing the development of the next University  long-range campus plan, is a TCNJ trustee and should be familiar with the success of Campus Town.

We wrote earlier this year about how modernization of Butler offers a chance to improve the student experience for Princeton grads, as well as providing much-needed housing for post-doctoral research staff and middle-class households who are excluded from Princeton’s increasing-rarefied housing market. Students are right to voice their concern about the problematic local housing situation. The town and University should listen to them, save Butler for a few more years, and put in place an appropriate plan for the future.

Walkable Princeton is holding a meet-up next Monday, Dec 16, 2013 at Yankee Doodle Tap room, and this subject is likely to be one of the things we discuss! Come join us! Our comments section is also open for you to have your say on what you think should happen to the Butler Apartments, or anything else that’s on your mind! Feel free to leave a comment below.