Posted on June 26, 2014 by walkableprinceton 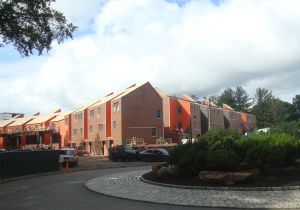 Part of Princeton University’s ‘Lakeside‘ project at Faculty and Elm Road. It will include new graduate housing but will it be enough? (click to expand.)

Princeton University’s Graduate Student Council (GSG) have released an official statement calling on University authorities to step up the provision of housing for post-graduate students. The statement, which was approved May 14, argues that every graduate student affiliated with the University should have the right to choose to live close to campus.

Issues with graduate housing have become acute, with the planned closure of the Butler Apartments off South Harrison Street. Butler has provided a large number of reasonably-priced rental units for graduate students for decades, but the University plans to raze the apartments and has no immediate plans to redevelop the site. The plan to demolish Butler has drawn criticism from at least one University professor, but the University has responded that new graduate housing, including that being constructed at ‘Lakeside‘ (see photo above) will offset the units lost.

The Graduate Student Council claims that the total proportion of graduate students accommodated in University housing is set to fall from 81% to 73%. By some measures, more than 1 in 3 registered graduate students will go unhoused. The statement points out that the Princeton private rental market is an entirely unsuitable place to find housing: To quote:

“Princeton’s private housing market does not meet this need. Rents in surrounding communities are too expensive to be reasonably accommodated by an average graduate stipend (themedian renter in Princeton earns more than double a typical graduate student stipend).”

As municipal Princeton has not zoned nearly enough multi-family housing, and regularly placed strict limits on the size of rental developments, it is not surprising that graduate students cannot easily find a place to live in Princeton. In 2014, tens of thousands of Princeton employees live outside town, many priced out of an exorbitant real estate market.

The Graduate Students have the possibility to lobby for more housing, and state excellent reasons why the University should offer them accommodation, not least to build a cohesive academic community. In their statement, the GSG proposes temporary measures, including keeping Butler open, and bulk-renting apartments in private residential complexes.

As Butler is out-dated, a long-term solution requires construction of much more accommodation. Fundamentally the University, like the town more generally, has a shortage of homes for its people. It makes little sense for graduate students to be excluded from the town- that runs counter to Princeton’s college town atmosphere, and undermines local businesses who depend in part on the student population for their continued success. The continued complaints from the graduate student body convinces us that the problem is real, and we can only hope that the town and University will work together to find an appropriate solution, and that local residents will not stand in the way of construction of new rental housing.

* Updated 6.27.14 – it has been pointed out to us that the Merwick-Stanworth redevelopment is for faculty housing, not graduate student housing.

Do you agree that there is an issue with finding rental accommodation in Princeton for graduate students? Or should they just go live somewhere else? Let us know in the comments section below.