Posted on October 2, 2013 by walkableprinceton 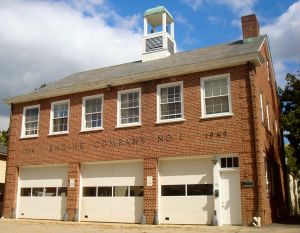 Engine Company No. 1 building on Chestnut Street. (Click to expand.)

There has been a firehouse on Chestnut Street since the former Borough built one there in 1879 (at a cost of $2,184). The present Engine No.1 firehouse dates from 1949. It was originally supposed to be at the corner of Hamilton and Chestnut, but ended up in a different lot mid-block. From its opening until 1963, the Chestnut St firehouse was also home to Princeton First Aid and Rescue Service, which subsequently moved to its present location on North Harrison Street. The 1949 firehouse is built in a very traditional style (by contrast, ground broke on Princeton University’s daringly modernist Robertson Hall just 14 years subsequent, in 1963). 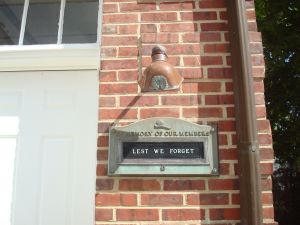 Memorial to fallen firefighters at the Engine No.1 firehouse on Chestnut Street in Princeton (click to expand.)

Faced with a potential reorganization of Princeton’s three firehouses, this building could become surplus to requirements in the coming years. In fact, at the time that this photo was taken, the mail had not been picked up, there were no fire trucks in the building, and no signs that the firehouse was seeing active use. The building was found to have structural problems in 2010, which made it too risky to store fire equipment there, and required emergency repairs.

Princeton Council has established a task force that is studying the potential for moving all firefighting operations into the Mercer Engine N0.3 firehouse, which might be expanded. If that comes to pass, the Engine No.1 building on Chestnut Street would be a strong candidate for some kind of historic preservation, or sympathetic reuse that would allow this attractive piece of Princeton history to survive.

How would you feel about redevelopment of the Chestnut Street firehouse? Would you be concerned if it was demolished? Leave your comments below.

This entry was posted in Beautiful Walkable Princeton and tagged Princeton. Bookmark the permalink.