Does Mayor Lempert Really Think That Middle-Class Princeton Workers Should Live In Trenton??

Posted on October 1, 2013 by walkableprinceton 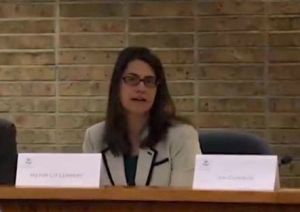 Mayor Lempert says people in Princeton ‘don’t want’ commuters to live in town. Where should they live instead? Trenton? (Image from Princeton Community TV – click to expand)

Princeton is suffering an affordability crisis that has seen the town’s middle-class largely driven out in the face of high property prices and taxes. Even junior research staff at the University find it hard to justify the cost of living in Princeton, and more than 3 out of 4 local workers now live elsewhere and drive into town every day, creating traffic and contributing to global warming. What does our Mayor think is the answer to this issue?

At a Princeton Future meeting earlier this year, Princeton Mayor Liz Lempert addressed the question of traffic in Princeton. You can find a full video transcript of the meeting here. The theme of the meeting was ‘Working Regionally’, and it featured Mayors from South Brunswick, Plainsboro and West Windsor as well as Mayor Lempert, representing Princeton. As terrible traffic is an issue facing all local communities, this became a major topic of conversation, and at 1:35:51, the moderator, Katherine Kish, asked a very important question: “How do we get people living closer to where they work, so we don’t have all their traffic?”

As we know, Princeton has approximately 22,000 car commuters entering the town each day, clogging our streets with traffic, endangering pedestrians, and taking parking from local residents. However, Mayor Lempert was clear that she doesn’t want to see these commuters living in Princeton instead. At 1:44:30, she says:

“If you look at Princeton…the volume of people who come into town every day to work…we don’t want them all living in Princeton <shakes head> It would change… <laughs> … it would so dramatically change our town that- that can’t be the answer.”

So what does she think is the answer?

“We have to look regionally for where those housing opportunities are going to be, making sure that there’s good transit, so that we make sure we have a system that works for everybody.”

Sounds good! But wait…transit in the Princeton area is pretty lousy, in large part because our population is so dispersed that it is uneconomic to run anything but slow, infrequent service (the Dinky is a worthy exception, but even it carries just 1.5% of Princeton’s incoming  commuters). Just 4.6% of Princeton’s daily workforce of 30,000 people currently take transit (bus + Dinky) to get to work. Given a choice between mediocre transit and their car, almost everybody is choosing their car. Mayor Lempert noted this (see 2:21:30 in the video), and also suggested a ‘regional’ place outside of Princeton where people might live:

“…we also have infrastructure that is already existing, that we’re not using to the maximal amount…so, if you look at the buses we have now, a lot of them are not at full capacity. Um, even just looking at the City of Trenton– you have a city that is not occupied to its full capacity, so…I think before we start spending a lot of money on new things, we should look at how can we use what’s already there, what we’ve already invested in it, to make it work better…”

Trenton, eh? It’s true that Trenton is not a place where many Princeton employees are living today. In fact, just 5.9% of Princeton’s daily workforce make their home in Jersey’s Capital. Why is that? Could it be the ‘abysmal, deplorable and dangerous‘ conditions at Trenton High School? Are they put off by Trenton Mayor Tony Mack – currently on trial for extortion, bribery and wire fraud? Or is it the record number of homicides in Trenton this year?

We don’t know, but we do find it curious that a major politician can be so vague about where Princeton’s tens of thousands of daily workers should live. Is it really fair that once these hard-working people have finished doing their job- working their shift, serving us Princeton residents- that we should push them out to someplace else- somewhere ‘regional’; or Trenton; or just anywhere that’s not Princeton?

Is it perhaps possible that we could share our town with some of these people, without it ‘so dramatically changing’ our quality of life? Census figures show that Princeton could add 6,000 new residents and still have an overall population density lower than in nearby Plainsboro. And more inclusive housing policy would not mean that every single person who works in Princeton would choose to live here. A very large proportion of the people who work in Princeton are likely happy living where they are and driving into town. But providing more walkable homes for some proportion of the workers who currently can’t find a reasonably-priced place to live seems like a fair and reasonable policy to increase healthy living, get traffic off our streets and address climate change.

Mayor Lempert’s comments suggest unquestioning acceptance of an idea that has become something of a cliché – that Princeton should grow only to the minimal extent possible or risk ‘becoming a city’ or ‘losing its character’. She’s not the only one who appears to subscribe to this dogma- it’s something we hear time and again from both elected officials and correspondents to the local press. What we’d like to hear is: “Yes, it is clear that we need to act now to provide more reasonably-priced housing for middle-income earners in Princeton, as an integral part of a wider program to sustain green, local living, reduce car-dependency, and cultivate a greater range of retail opportunities for area residents.”

Election time is just around the corner, and we plan to ask some serious questions about this issue to the three candidates who are running for Princeton Council. Where do they stand on fair housing opportunities in Princeton? Are they ready to support a lifestyle where people are better able to live, work and shop locally? Do they have any ideas on how to make it easier for people to get where they need to go without using a car? Stay tuned, because we’ll be aiming to find out in the coming weeks…

We asked Mayor Lempert for feedback on this piece, but received no reply at the time of publication. Feel free to leave your comments below.

1 Response to Does Mayor Lempert Really Think That Middle-Class Princeton Workers Should Live In Trenton??