Posted on June 28, 2013 by walkableprinceton

Townhouses along Franklin Avenue in proposed AvalonBay development on Princeton hospital site. The parking structure at the end of the service drive is visible on the right side (Click to expand)

New images of the redesigned AvalonBay apartment complex, which is proposed for the former Princeton hospital site on Witherspoon Street, were presented last night to the Princeton Planning Board. The plan, which represents one of the largest new walkable housing developments in Princeton in recent years, features two apartment buildings and three townhouse buildings. Update: we now have a video showing a 3D walk-through of the site, which you can see here.

Proposed AvalonBay apartment complex and new park, seen from the corner of Witherspoon and Franklin. (Click to expand)

For those interested in exactly what was discussed, we did a minute-by-minute live-tweet at our twitter page @walkprinceton. Municipal committee heads reported to the Planning Board, before the AvalonBay team presented details of the site plan. There was no time at this meeting for cross-examination or public comment.

Proposed new park at AvalonBay apartments on Witherspoon and Franklin, seen from the air. The kids’ play area is the checkered section on the right. (Click to expand.)

One interesting exchange, involving Wanda Gunning and Marvin Reed related to what play equipment for kids would go in the new park. The play area in the park will be 14,000 sq feet. It emerged that AvalonBay have not decided what play equipment would go there. They want to work with the Planning Board on this question. Marvin Reed mentioned that there was an issue about whether the play equipment should target 3-5 year old children, or 6-8 year old kids. Wanda Gunning suggested, quite rightly, that members of the public would probably have some ideas! If you want to have your say about what play equipment goes in the new park, you should probably plan to attend a Planning Board meeting or write to a Council member.

AvalonBay plan to protect five mature trees at the proposed park: one magnolia, two maples, and two honey locusts. (The pedestrian paths have been modified to save the trees.) In addition to this, there will be substantial new plantings, including plane trees along Witherspoon St, Princeton elms along Franklin Avenue and zelkova trees in the mews behind the town houses. AvalonBay announced that they want to add two pieces of public art in green spaces around the site, and want input from the Princeton Arts Council about suitable works. 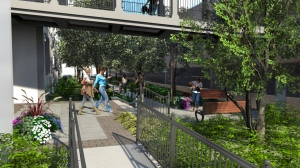 Several committee chairs spoke favorably about AvalonBay’s efforts to accommodate feedback from the community. Changes to landscaping and various external amenities have already been included. Questions remain about the plan, however, and the committees delivered a lengthy collection of conditions for approval of the plan. Some of these seem helpful, but others, such as the SPRAB recommendation to reduce the height of the townhouses, seem arbitrary and would unnecessarily limit the diversity of housing choices available, or-worse-lead to a loss of affordable units.

What type of play equipment would work best in the new park on Witherspoon Street? And what issues do you think haven’t been addressed yet with the new apartment plan? Leave a comment below! Note- next Planning Board hearing is July 11.

This entry was posted in Princeton, Smart Growth, Zoning. Bookmark the permalink.