Posted on March 20, 2013 by walkableprinceton 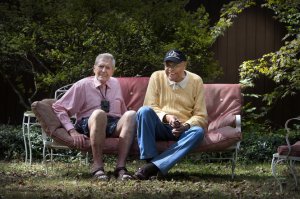 When thinking about who gets to live in Princeton, it’s worth considering an earlier fight for open housing in the local area. In the first half of the twentieth century, Princeton was a segregated community, with African-Americans being denied the opportunity to shop and live in the same places as white people. Even in the 1950s, as Civil Rights legislation started a nationwide move towards desegregation, many African-American people in Princeton were restricted in where they could live.

This segregation was opposed by local activists such as Len Newton and James Floyd. As described in this profile from the Times of Trenton last year, Len acted as a ‘convener’, leading a campaign to develop what was then known as the ‘Maplecrest’ neighborhood of Princeton (now part of Walnut Lane and Dempsey Avenue) as an integrated community. This effort was opposed by many people, but as Len observed:

“You have to stand up and speak out. You cannot be complacent while others are being denied.”

We salute Len and others who fought for the right of everybody to have the freedom to live where they choose, regardless of the color of their skin. Thankfully, open racial discrimination is a thing of the past in Princeton, but we must remember that our actions have real signficance in determining the character of our town. With high property prices now threatening the social makeup of Princeton, we should all feel inspired to continue the struggle to make Princeton an inclusive community where everybody has a fair shot.

This entry was posted in Local, People, Princeton, Real estate. Bookmark the permalink.