Posted on November 24, 2020 by walkableprinceton

Over 250 residents have signed a petition calling for a more walkable design for lower Witherspoon Street in Princeton. The two blocks of Witherspoon Street closest to Nassau Street have been converted to a one-way setup for most of 2020, to facilitate safe outdoor dining during the coronavirus pandemic. Council is now considering long-term changes to the layout of Witherspoon Street, to coincide with an upcoming sanitary sewer replacement project that will require this section of the street to be dug up. Public consultation on potential changes to Witherspoon Street began in February, and has been continuing throughout the year.

The petition calls on Council to “Make Witherspoon Street a Pedestrian and Dining Paradise!” It was started by local resident Brian Levinson, whose letter praising the reconfigured Witherspoon Street was recently published in ‘Town Topics’.

The goal of the petition is to express support for a “people-friendly” Witherspoon Street “that’s safe and accessible to residents and visitors of all ages and abilities, a public place where we can enjoy art and music and everything that helps to define a vibrant downtown.” In public surveys, the most popular options for a redesigned Witherspoon Street have been to close the road to traffic entirely, or to continue with a one-way system similar to the current layout, which allows wider sidewalks and outdoor dining. In other college towns, downtown streets have been closed to traffic to create areas where people can walk and dine outside without competing with motor vehicle traffic. Princeton briefly had a pedestrian area on Palmer Square in the early 1970s, but it was reopened to cars, and traffic in town has since increased almost 10-fold.

The four-block, car-free Church Street Marketplace in Burlington VT opened in 1981. With three million annual visitors, it has an extremely low vacancy rate, and has allowed businesses to fend off competition from out-of-town malls. Closer to home, Division Street in Somerville, NJ became permanently car-free in 2014. With a population of just 12,000, Somerville’s downtown has suffered from competition with high-end malls in nearby Bridgewater. Creating a car-free zone is credited with helping to lower the vacancy rate on Division Street, by drawing people into downtown Somerville. 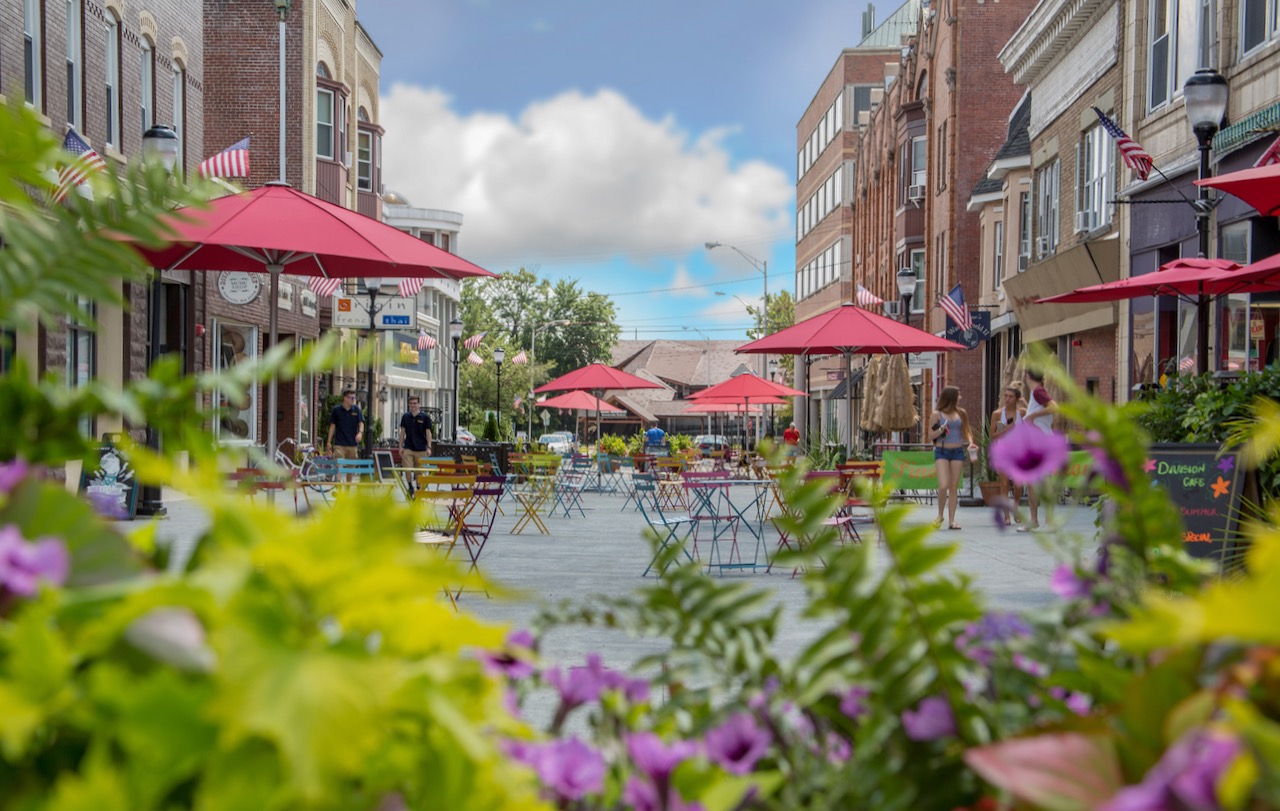 Princeton Council recently repurposed space on Nassau Street to create more parking for downtown businesses. Council is also piloting a program to allow downtown employees to find parking in residential neighborhoods. Employees will be given transferable permits, to allow them to park for free while working for downtown businesses. Consultants are currently examining the potential traffic impacts of potential changes to circulation around Witherspoon St & Nassau St, and are expected to report to Council before the end of the year.

The petition for a walkable Witherspoon Street remains open for new signers at this link.

This entry was posted in Uncategorized and tagged car-free, pedestrian mall, Princeton, Walkability. Bookmark the permalink.