Posted on September 11, 2020 by walkableprinceton

Witherspoon Street closed to motor vehicles during ‘Communiversity’ in Princeton. (click to expand)

The Princeton Municipal Engineering Department is considering the possibility of permanently closing part of Witherspoon Street to motor vehicles, as part of a consultation on planned improvements to the streetscape. The current project involves the southern end of Witherspoon Street, between Nassau Street and Green Street, and is scheduled to be completed before the end of 2021. An initial community consultation took place at Monument Hall in Princeton on February 13. The public comments collected at that meeting can be viewed on the municipal website, and indicated substantial support for improved biking and walking facilities, and even for dedicating Witherspoon Street in downtown Princeton as a pedestrian area, similar to those seen in several other college towns.

Based on the public feedback and design considerations, municipal engineers have developed five potential concept plans for lower Witherspoon Street, which have been published on the municipal website:

Option A would see changes to the layout of Witherspoon Street that would be similar to those initiated in response to the coronavirus pandemic. The section of Witherspoon Street between Nassau Street and Spring Street would be one-way only, in the north-bound direction, with one ‘curbside pickup’ lane. By limiting motor vehicle traffic to one direction only, the town would create space for wider sidewalks and street dining areas.

Option B would also involve one-way traffic on Witherspoon Street between Nassau Street and Spring Street, but with curbside pickup / parking bays on both sides of the street. In this layout, there would not be room for permanent street dining, but sidewalks could be widened slightly.

Option C involves complete closure of Witherspoon Street to motor vehicle traffic between Nassau Street and Spring Street. People would be able to use the full street width for walking, and there would be substantial extra space for street dining. 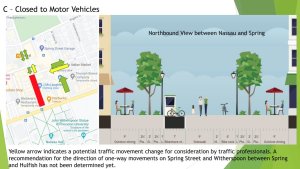 Option D would involve two-way traffic on Witherspoon Street, with parking on one side. With this option, sidewalks could be widened slightly, but there would be no street dining areas.

Option D: Two-way traffic with one loading lane and somewhat-expanded sidewalks on either side. 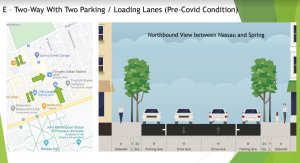 Option E: Existing conditions, most of the space given over to two-way traffic and two parking lanes, no strategies, narrow sidewalks.

The Engineering Department is aiming to get further input from members of the public in two ways. Firstly, they have set up a survey where people can indicate which of Options A – E they prefer. Secondly, there will be a public presentation of the different options by Zoom on Tuesday, September 15, from 7.00 p.m. – 9.00 p.m. (link for Zoom meeting).

If Princeton closed Witherspoon Street to traffic, it would join other college towns like  Charlottesville VA, Burlington VT, Ithaca NY, and Boulder CO, all of which have popular downtown pedestrianized areas. Closing Witherspoon Street to cars would bring environmental benefits, such as cleaner air and less pollution, and potentially create an enjoyable space for public art and street music. On the other hand, business owners may fear the effects of limiting car traffic and parking. Any change in traffic patterns would presumably require a detailed traffic study, but notably, the closure of Alexander Street in Princeton last year for a bridge construction project did not add significantly to regional journey times, or displace traffic to other routes. Princeton previously pedestrianized part of Palmer Square in 1973, but the roads were subsequently reopened to cars.