Posted on September 26, 2019 by walkableprinceton

‘Princeton Future’ is hosting a community discussion “Changing The Way We Get Around” at Princeton Public Library this  Saturday (Sep 26) and it has been getting quite a lot of attention in local media.  A group of Princeton University students, under the guidance of transportation expert, Prof. Alain Kornhauser, will present their proposal for ‘on-demand’ transit. Outlines of the proposal were already discussed at the town’s Public Transit Advisory Committee on July 9. The students envisage a fleet of shuttles, potentially self-driving vehicles, which could be summoned by a smartphone to take a passenger wherever they need to go. In contrast to traditional, fixed-route buses, these ‘on-demand’ vehicles would go wherever they were needed. At the Princeton Future meeting, the students will discuss the plans and seek feedback on what areas would benefit most from this service.

The concept of ‘on-demand’ transit is not completely new. Even in Princeton, ‘Crosstown Transportation‘, which is available for seniors, offers door-to-door transportation, by prior reservation, to any destination in the municipality, for $3. The most modern versions of this kind of transit service use smartphone apps and aim to group riders from similar areas into shared vans, so the shuttles can reach more people, more quickly. Although some transit experts have expressed skepticism that on-demand shuttles can ever move as many people as traditional transit, many towns are launching experiments to see if on-demand transit can help their residents meet their transportation needs. At best, on-demand transit could complement traditional bus services to enable more people to get by without owning a personal automobile.

A major problem with on-demand transit, as with any other transit service, is how to pay for it. The team from Princeton University hopes to reduce costs by using self-driving vehicles. Although driverless vehicles would certainly cut down a lot on operating costs, there is a big problem in that they do not yet actually exist. Although optimists will point to several trials that are currently underway around the USA, it is very hard to guess how long it will take before these services are ready to roll on regular roads. It could be 2 years, 5 years, 10 years, or more. Autonomous vehicle boosters will argue that full commercialization of driverless technology will arrive soon, but it could end up like the promise of nuclear fusion, which has been ‘just around the corner’ for the last 50 years.

If it is good to plan for a driverless future, it may also be worthwhile to consider what kind of on-demand transit services could be implemented in Princeton right now. The best nearby comparison might be the on-demand shuttle service announced earlier this week in Jersey City, NJ. This service will extend a new transit link into under-served neighborhoods in Jersey City. Fourteen shuttles, which will basically be minivans, will be available for residents to summon by smartphone app, and will whisk them to wherever in the city they need to go for a flat fee of $2, or just $1 for seniors. The system will be organized by Via, a company that has designed software for commercial, on-demand carpool services that are currently operating in New York, Chicago and Washington DC.

This on-demand transit contract is costing Jersey City $2 million per year for the 14 vans. By comparison, the town of Princeton is spending $184,000 per year on the town’s ‘FreeB’ jitney. That means the town would have to spend more than ten times as much on transit to support a 14-vehicle on-demand service, using existing technology. If that is too much (which seems likely) then the town could try a more modest on-demand service, similar to the one that has been operating for several years in Summit, NJ. Summit has a partnership with the rideshare company, Lyft, which allows residents to schedule a ride from their home to Summit rail station, any time they want, for a flat fee of $2. The program was originally set up because parking is limited at Summit rail station. The on-demand transit option helps train riders get to the station without having to park their own car. 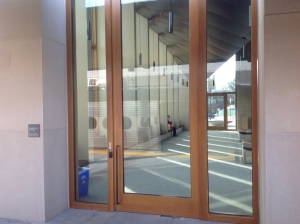 Driving to the Princeton ‘Dinky’ rail station and parking there is also inconvenient, and the station is not particularly close to most residential areas in town. A trial of on-demand transit could test whether it might help potential Dinky riders get to the station in a way that was financially-sustainable for the town. When Princeton University built the new Princeton rail station in 2014, they also  contributed $500,000 to set up a ‘Transit Trust Fund’, which could be used to support new initiatives to increase transit use in Princeton. (This contribution was intended to help defuse the controversy over relocating the station 800-ft to the south.) Five years later, the town has not seen a lot of good uses of that money. Perhaps a trail of new transit options could help support Dinky ridership, and test whether ‘on-demand’ services could work well in Princeton.