Posted on June 5, 2019 by walkableprinceton 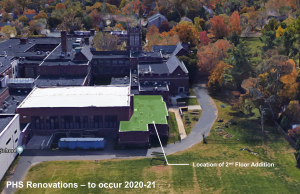 At a special meeting on Tuesday night (June 4, 2019), the Princeton Board of Education considered bids for work to be completed to local schools as a result of the bond referendum that was passed by voters last year. The Board also inspected plans and renderings for a proposed addition to Princeton High School. Two ‘concept plans’ for the addition were presented, with different styles. In each case, the additions would allow improvements to fitness and wrestling facilities on the ground floor, and creation of a ‘learning commons’ on the second floor. Mechanical apparatus and air-conditioning equipment would be placed on the roof.

‘Concept A’ for Princeton High School Addition. (click to expand)

The ‘Concept A’ plan has a brick pattern that is intended to match existing buildings. Air conditioning units would be concealed by screening on the flat roof. 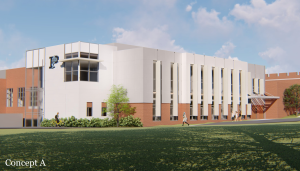 ‘Concept A’ for Princeton High School Addition. (click to expand)

The alternative design for the addition is ‘Concept B’, which features a sloped roof.

‘Concept B’ for Princeton High School Addition. (click to expand)

According to the architect, ‘Concept B’ was more favorably received in meetings with neighbors earlier this year: 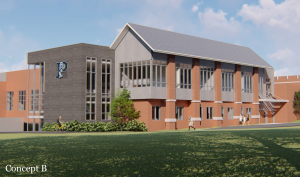 ‘Concept B’ for Princeton High School Addition. (click to expand)

After the Board makes a decision on what design they prefer, bids will go out in early 2020 so that construction can begin in 2020. Construction is expected to last until 2021. There were no questions or comments from the public at the meeting, but the architect faced some questions from Board members because some bids for other projects had come in significantly over the expected cost.

You can view the full presentation from the architect, with additional plans and pictures, at the Board of Education’s website at this link.

A video of the meeting (54 mins) can be viewed below: