Town of Princeton Heads Back To Court For Affordable Housing Mediation

Posted on December 17, 2018 by walkableprinceton 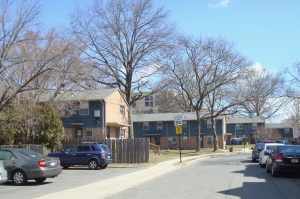 Affordable Housing on Clay Street in Princeton. (click to expand)

A team of negotiators representing the town of Princeton is expected in court today amid ongoing discussions about how much affordable housing the town is required to build. Earlier this year, Princeton officials announced a plan to build 1,259 homes to satisfy state fair housing requirements. As we reported in the summer, however, the affordable housing plan had a number of issues that would likely make it unsatisfactory to Judge Mary Jacobson, who is overseeing all the housing cases in Mercer County. The town subsequently abandoned its proposed timeline for implementation of the housing plan, and municipal officials have said nothing since. What is going on?

Jenny Crumiller (left) and Lance Liverman (right) are the elected officials on the housing negotiations team. (click to expand)

For several months, the ‘Affordable Housing (negotiations)’ team has been holding conference calls with representatives of the Court and Fair Share Housing Center. We don’t know what they’ve been talking about, because local elected officials are refusing to comment on the housing case while it remains under litigation. At the start of November, court documents suggested that the parties were close to an agreement, but this did not materialize. Instead, a letter sent to Judge Jacobson by Kevin Van Hise, an attorney who is representing the town, requested that a retired Judge, the Hon. Philip S. Carchman, should help with the negotiations. The Hon. Carchman will meet with representatives of the town and Fair Share Housing Center in Mercer Superior Court later today (Monday, December 17) in an effort to bring the negotiations to a conclusion.

It’s still not clear how much longer it will take the town to reach a final deal over how much affordable housing it is willing to build. Presumably, if a settlement cannot be reached this month, Lance Liverman will no longer be able to represent the town, because his term on Princeton Council finishes at the end of the year.