Princeton Must Build Thousands Of New Homes. Where Can They Go?

Posted on June 9, 2017 by walkableprinceton

Time to build: Princeton urgently needs to allow for construction of a huge amount of housing (click to expand)

The town of Princeton announced at the end of April that it will settle a court case about how much affordable housing the town will add through 2025. Six weeks on, the terms of the settlement are still shrouded in secrecy. Nobody at the town is talking, but it seems very likely that the town will have to add somewhere in the region of 700 new affordable homes. The town will build most of these as ‘inclusionary’ units in larger, market-rate developments, which means that several thousand homes will probably have to be built. But the settlement, when it comes, will not just say how many homes Princeton must allow. It will also specify the *sites* for new affordable homes, and set a timetable for zoning changes to allow the homes to be built. Members of the public are not getting the chance to comment on where the housing should go, but here are some ideas…

The usual way to plan housing is to look for a piece of land – a field, or forest – and build homes on it. That is the way that most single-family neighborhoods were built in Princeton, mostly on former farms. But this is not the most sustainable way to build, and there aren’t many large pieces of open land left in Princeton that haven’t already been turned into parks. Instead, new development should be focused near to amenities (stores/schools) or near transit lines. Considering these factors, housing should be targeted to:

Princeton rail station, as seen from the south (click to expand)

Walkable to town, and close to the Princeton Rail station, which is served by several NJ Transit buses and the ‘Dinky’ train, this is an optimal location for housing. It is also relatively far from existing residential areas, so building there is less likely to spark complaints. The town should go big at this site, aiming for at least 1,000 new homes, of which 200 could be affordable homes under the town’s “20% affordable set-aside” rule. After construction starts, Princeton should apply to join the New Jersey ‘Transit Village’ initiative, which provides extra funding to towns that up zone near transit stations.

Demolition of the old graduate housing off South Harrison Street opened a huge piece of land for redevelopment. This site is walkable to town and the University, and was previously served by ‘Tiger Transit’. The University has openly talked about redeveloping new homes on this site. The town should encourage development of at least 500 homes on this site, of which 100 could be affordable homes. There are currently no affordable developments in the Riverside neighborhood, and this would rebalance affordable housing around the town.

Princeton Shopping Center: It’s OK, but adding housing would allow better use of the site. (Click to expand)

The two-story 1950s-era strip mall is under-utilized and surrounded by acres of impermeable surface parking. The whole place would be redeveloped in phases, which would surely be an attractive prospect for the management company. 800 townhouse and stacked apartments seems like a reasonable number to start with at this site, of which 130 could be affordable units. The site next to thePrinceton Shopping Center on Terhune Road is already earmarked for senior housing. The town should also consider rezoning some of the under-utilized commercial areas between Terhune Road and Bunn Drive, to allow even more housing to be added. With these developments, the Shopping Center could become a true mixed-use, sustainable ‘village’, and it is already well served by NJ Transit buses. 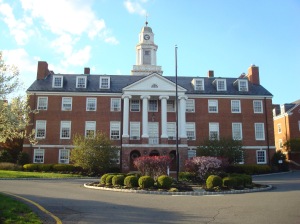 Everybody wants the Choir College to stay in Princeton, but its parent institution, Rider University, seems to want to sell it off, and possibly move the musicians elsewhere. The town should proactively work with Rider and the staff at Westminster Choir College to  upzone the land at the back of the Choir College near Franklin Avenue. By adding 300 units of housing here, the Choir College could ensure a revenue stream to secure the institutes’ future. The town would secure 60 units of affordable housing, to count toward its state-mandated requirements.

Next to the Town Hall and Community Park pool, the large surface parking lot could be a great site for walkable and transit-accessible housing. A developer would realistically need to replace the parking spaces with some stacked parking, so it may be necessary to build up to 6 stories to allow a useful amount of housing to be added here. 300 apartments would probably be possible, however, which could allow a further 60 units of affordable housing in a great location. 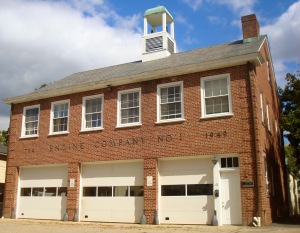 Disused firehouse at Chestnut St. in Princeton. (click to expand)

A number of small sites exist throughout the town that could be adapted for housing. Most obviously, the firehouses on Chestnut Street and North Harrison, which are no longer used much for firefighting, could be converted into housing. The derelict Valley Road School Building is also a prime candidate for adaptive reuse. The disused surface parking lot on Franklin Avenue will certainly have to be used for housing, even if the neighbors would prefer it to be a park (it might be possible to do both). Redevelopment of the old Borough Hall and adjoining Senior Center could also allow additional housing to be added. Let’s assume that if we use every site that’s available, we can do 150 units of housing, which could allow for 30 units of affordable housing under the 20% set-aside rule.

Princeton Community Village is a 100% affordable housing community, which means that  (if funds could be found) all housing built here would contribute to the town’s affordable housing obligation. 40-50 new units could probably be constructed at this site. It is not particularly close to amenities, but it is served by NJ Transit buses, and a pretty nice bike path up Bunn Drive.

The options described above, if they can be built as densely as suggested here, would provide 620 units of affordable housing. This might be enough to satisfy state requirements, especially after various ‘credits’ are applied. But the scale of the construction (approximately 3,100 homes, under this plan) is likely to cause consternation in the community. It’s too bad that more people aren’t talking about this, because the town has an obligation to find room for these homes. The state requires that this housing be built, the only question is where do we put it and how will it be funded? These decisions will have to be made and put in motion by the end of 2017. If we don’t think about these things carefully, we’re unlikely to get a good outcome. Right now, it’s town planners who are making the decisions behind closed doors. Where do you think the housing should go?

3 Responses to Princeton Must Build Thousands Of New Homes. Where Can They Go?