Which Princeton Transit Service Draws The Most Riders?

Posted on July 2, 2015 by walkableprinceton 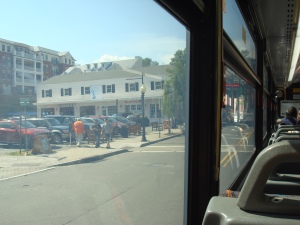 Downtown Princeton, as seen from inside a NJ Transit bus. (click to expand.)

The recent announcement from NJ Transit that the Princeton-Plainsboro ‘HealthLine’ bus will be canceled has drawn local condemnation, and also some questions. How bad was the ridership for NJ Transit to cancel the service? Using recent ridership statistics from NJ Transit, we can compare the HealthLine bus to other bus and rail services connecting Princeton to the surrounding area…

Transit services can be measured by ridership (the number of passengers carried) and farebox recovery (the fraction of the service’s operating expenses that are covered by paying passengers). By either measure, the #655 HealthLine bus was a poor performer. 38,483 people used it in 2014, equivalent to an average of about 105 people per day. The number of passengers actually declined between 2013 and 2014. Farebox recovery was just 4.4%, meaning that for every dollar of operating cost, this bus line required 96 cents of subsidy.

Pretty much all transit services get some level of subsidy, and that is also true for car transportation. The gas tax, which many people believe funds all roads, really covers less than half the cost of state road spending. Local roads are subsidized at an even higher rate by property taxes. But the farebox recovery ratio of the HealthLine bus stands out among NJ Transit services for being especially poor. Not quite the worst in the entire network, but not far off.

At the other end of the spectrum, the Northeast Corridor rail service, which connects Trenton to New York via Princeton Junction, has a farebox recovery ratio of 88%. This means that the line only gets 12 cents of subsidy for each dollar spent- a remarkably good performance. The Princeton Branch aka ‘Dinky’ train does not have separate farebox recovery figures in this report, but we know that it is one of the most popular transit services in town. According to data obtained by Planet Princeton, ridership on the Dinky can be up to 47,500 per month, equivalent to 570,000 passengers per year.

But the Dinky is not the transit service in Princeton that draws the most riders. That would be the NJ Transit #606 Hamilton-Trenton-Princeton service. It draws an annual ridership of 658,239 passengers (1,803 per day on average), with a farebox recovery rate of 23.1%. Princeton’s other NJ Transit service, the #605 Montgomery-Princeton-Quaker Bridge Mall line, gets 159,827 riders per year, (437 per day on average), with farebox recovery of 13.8%.

H/T to transitism for the report. Let us know your thoughts about transit in Princeton using the comments box below.

2 Responses to Which Princeton Transit Service Draws The Most Riders?