Posted on April 22, 2015 by walkableprinceton 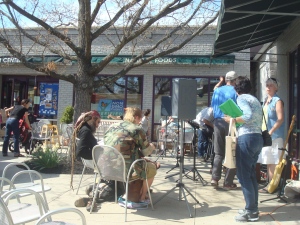 Last Saturday, ‘Whole Earth Center’ on Nassau Street celebrated its 45th anniversary with a party and a sale (see photo above). The Whole Earth Center has been in the Princeton community since 1970, when its arrival was marked by a short article in ‘Town Topics’, alerting its readers to a “non-profit community project which will sell natural and organic foods and books about ecology…”

Whole Earth Center has seen off challenges from national chain stores, such as the ‘Wild Oats Market‘, which set up at 255 Nassau in the 90s. More recently, the arrival of Whole Foods on Route 1, has presented the type of competition that has led to the disappearance of independent whole foods stores across the nation. ‘Whole Foods Princeton’ regularly tweets about its commitment to environmentalism and localism, even though it’s a car-dependent big-box store in West Windsor. It’s still a great store- but Whole Earth Center is right in our neighborhood. It is the original green, enabling people to shop locally, and offering a discount for bike- and transit-using customers.

Local stores, along with local housing, are the mainstays of a walkable community. Sidewalks are not sufficient if there is nowhere to walk to. Whole Earth Center has offered a local alternative to big-box shopping for almost 5 decades. And this is clearly a business that is answering a popular demand. It has a wide array of produce, as well as a food counter, and speciality products for the granola-minded Princetonian. Some folks might not like the political ‘ban this, ban that’ posters around the store, but it’s nonetheless an institution that has provided employment and an amenity to local residents for longer than most of us have even been around. Whole Earth also shows that chain stores don’t always win. When a local indie is good enough, it will survive, and even thrive.

April 22 is Earth Day. An easy way to celebrate it is to shop in one of our local stores. By helping out a local businesses, we look after the people who make our town the walkable place it is.

Are you a regular customer at Whole Earth Center. How much of your weekly shopping can you get done in Princeton itself, without going to Route 1? Let us know in the comments section below…

This entry was posted in Community, Downtown Vibrancy, Princeton, Sustainability. Bookmark the permalink.