The ‘New York Times’ Doubles Down On Walkable Suburban Places

Posted on April 21, 2014 by walkableprinceton 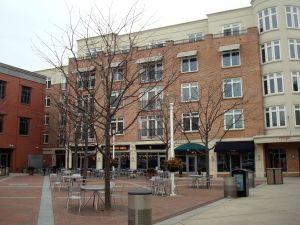 Apartments next to the Princeton Public Library. (click to expand.)

The ‘New York Times’ has picked up on the growing demand for walkable paces with a pair of articles in less than a week. The first, ‘Suburbs Try to Prevent an Exodus as Young Adults Move to Cities and Stay‘, discusses the growing trend for young adults to move out of suburban towns like Princeton to big cities to study or seek work opportunities. In many cases, they don’t come back.As the article points out:

“Since 2000, Westchester, Nassau and Suffolk have experienced a drop in the number of 25- to 44-year-olds, with the declines particularly sharp in more affluent communities.”

The risk is that suburban towns end up with very few young people. Is this a problem? Affordable housing advocates point out that the high rents and house prices and a lack of housing choices make it difficult for young adults to gain a foothold in affluent suburban communities. Towns that aim to include all ages are making a special effort to add apartments and diverse housing choices. One example is Westbury, NY, a Long Island community, which, like Princeton, is on the commuter line to the city and has seen galloping increases in property prices. Westbury has recently added 850 apartments, despite having a population of just 15,000. In Princeton, plans to build apartments have faced stiff resistance from resident groups.

It is of course a false distinction to assume that people must make a stark choice between living in a high-rise city vs a sprawling suburb with rows and rows of houses and nothing else. As Princeton’s ‘Tree Streets’ and Witherspoon-John neighborhoods show, with moderate density it is possible to have areas where single-family homes can support local business and residents can access amenities without having to use a car. The second NY Times article, ‘Can Paradise Be Planned?‘ reviews a new book by architect Robert Stern, which advocates a return to ‘garden suburbs’, which are:

“In contrast to the suburbs we’ve come to be most familiar with…situated in a comfortably dense, highly walkable environment designed around a public center or square.”

Mr Stern’s book argues that planners should make a renewed push to build walkable place where people are not “chained to their cars whether they’re taking their kids to school or getting a haircut.” The review in the NY Times discusses many of the advantages of compact, urban places in terms of public health, sustainability and making great places where people want to live. On the other hand, as the reviewer notes, it is hard to change communities once they are built out, and, locally at least, it is worth noting that our most walkable neighborhoods are those that were built before planners and zoning codes started interfering with residential development. Although Princeton University has a walkable layout, planning and zoning in municipal Princeton has always prioritized auto-dependency, and it will take a huge effort to change that.

You can contribute to the discussion using the comments box below. How would you define ‘comfortable density’?