Posted on October 28, 2013 by walkableprinceton 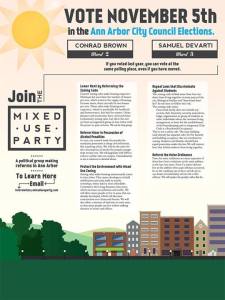 Students in Ann Arbor have started a new political party, based largely on land use reform. (Click to expand.)

What are the issues that motivate students in 2013? Based on what’s happening in Ann Arbor, MI (home of  the University of Michigan, a famous ‘public ivy’) it’s…zoning reform!

What’s going on? Students of the Baby Boom generation must be astonished. In the 1960s and early 1970s, they  joined protests that struck at topics like international war, the domestic political apparatus, and racial and sexual equality. Why are young people nowadays so bothered about a mundane topic like municipal zoning? And why can’t their concerns be addressed by existing political parties? Some answers can be found at the website of the Ann Arbor Mixed-Use Party. The group is taking aim at high rents and environmental degradation, both of which they believe are a consequence of existing zoning:

“The current zoning code limits the amount of space available for new housing in Ann Arbor.  People build houses over farmland in nearby townships, but…mixed use zoning will create space for new housing within the city by allowing more bedrooms in each house and more houses on each parcel of land. Landlords will lower rent to avoid vacancies.”

The group wants to replace the current zoning with a radically simpler alternative. They claim that under this plan, “housing will be cheaper, walking to stores will be easier, natural areas will be preserved, and people will be freer to do what they want with their property.” Their plan involves abolishing single-use zoning, where residential and commercial areas are separated, and replacing it with a ‘form-based’ alternative, where any use is permitted as long as the building is within a certain height limit. They are running two candidates in the Ann Arbor Council election on November 5. The ‘Mixed-Use Party’ drew praise from Matthew Yglesias, author of ‘The Rent Is Too Damn High’ (profile in the NY Times here). Yglesias wrote, “the more flexible approach will create more economically vibrant landscapes than trying to do top-down planning.”

Proponents of existing zoning argue that it protects neighborhoods from unwanted development. But restrictive zoning leads to insufficient construction of new housing, increasing property prices and causing real hardship for people of modest incomes – such as students. People are faced with a choice of paying outrageous rents or living miles away from where they work/study. The Ann Arbor Mixed-Use party believes it is possible to reform zoning to increase housing opportunity and maintain the character of downtown Ann Arbor. Drawing support from all areas of the political spectrum – from libertarian to extreme liberal – they have chosen to run as independents under the new party banner.

In Princeton, our zoning has certainly contributed to an affordability crisis that has pushed out most of the town’s middle-class. (Princeton University students are mostly spared the ill effects, as the University provides accommodation to all undergraduates.) The current situation is hardly fair, and it is self-defeating as well, because employees who can’t live in Princeton drive into town every day, creating huge amounts of traffic and tying up large areas of our downtown with parking. It’s interesting, but not at all surprising, that students in another college town have recognized that distortion of the housing market caused by zoning is a cause of high rent al prices and loss of green spaces.

We have no plans to set up a new political party- but we have asked some questions to the candidates for our upcoming Council election. We’ll be running their answers during the rest of this week, ahead of the voting on Nov 5.

Are you surprised that municipal zoning has become an issue in student politics in 2013? Do you agree with the ‘Mixed-Use Party’ that zoning is a cause of the lack of affordable housing and environmental degradation? Have your say using the comments box below!