What Happened When A Local Mom Asked Princeton For Improved Crosswalks?

Posted on September 24, 2013 by walkableprinceton 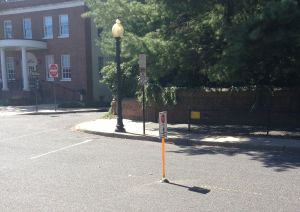 Hooray! A new in-street ‘stop for pedestrians’ sign at Chambers and Hulfish! But questions remain… (click to expand)

Last Wednesday, two representatives of ‘Walkable Princeton’ accompanied Dr Rachael Winfree, a Princeton resident, to a meeting of the municipal Traffic and Transportation sub-committee that deals with pedestrian improvements to local streets. (Regular readers will recall that we recently reached out for support regarding this issue.)

Dr Winfree had asked the committee for a number of safety improvements at the Chambers-Hulfish intersection, to make at least on of the crosswalks there safe enough for her kids to walk to school:

– The committee was open to re-striping the crosswalks.

– And they also agreed to add in-street ‘stop for pedestrians’ signs on stanchions, similar to those seen at Witherspoon and Hulfish!

The very next day, in-street ‘stop for pedestrians’ signs appeared at Chambers and Hulfish! This is great, and will help make the intersection safer. The speed that the new signs appeared shows that the system can lead to rapid implementation. We congratulate the Traffic and Transportation sub-committee, Mr Langston, and the Department of Public Works. They have a very difficult job finding ways for roads to be shared, and their agenda had an almost-overhwelming 37 items!! (Remember also that volunteer committee members receive zero compensation from the town). However, we have a number of observations:

1. Safety should really be the #1 priority.

The sub-committee has a philosophy of making the smallest change possible to existing roads. As voiced by Sgt Murray after Dr Winfree left the meeting, “sombeody asks us to change 3 crosswalks, but there are thousands of motorists to consider.” This is true, but safety ought to be the primary consideration. When the Boeing 787 caught fire after a battery incident, the Federal Aviation Authority didn’t wait for the plane to crash before taking action- they pre-emptively grounded the entire fleet. This action is incredibly costly for the carriers operating the planes, and terrible publicity for Boeing. But it represents the logical outcome of placing human life above other considerations. Meanwhile, cars have killed 58,500 Americans since 1998.

In Princeton, safety is not the number 1 priority. It is something to be balanced with the rights of drivers to get across our town quickly, and for people to find convenient parking. This seems extraordinary. Parking which demonstrably obscures visibility of the crosswalks is going to remain in place until somebody is run over, and that is municipal policy. Why take a chance? Take the parking out now.

Many pedestrian safety solutions are thrown out for all kinds of reasons. Princeton recently banned new speed humps, frustrating local parents who are tired of seeing drivers speed down their streets. One mention of ‘MUTCD standards’ is enough to cancel discussion of safety measures that could save lives. If adding the safety measures was considered vital, Princeton would find a workaround, or just disregard the code. But at present, ‘the code’ is sufficient reason to justify not doing something that might increase safety.

3. Enforcement is not a substitute for engineering solutions.

Dr Winfree was advised that speeding on Chambers Street is a separate issue to the crosswalk design. Speeding would have to be addressed by police enforcement. This is not the case. The speeding happens because the street makes it easy for drivers to speed. Improved traffic calming is far more likely to reduce speeding than occasional police enforcement. Our police cannot be everywhere at once, but engineering solutions, once put in place, work 24/7. In fact, it is not even a good use of police time to be standing on Chambers Street with a speed gun. As long as we rely on our police to be everywhere at once, we cannot expect safe streets.

4. Why implement solutions that aren’t going to work?

Dr Winfree got in-street ‘stop for pedestrians’ signs, but Sgt Murray warned that the signs would ‘definitely’ be run over by carelessly-driven vehicles, possibly within a matter of days. If the sub-committee really believes that’s the case, why not do something more substantial now?

The Traffic and Transportation sub-committee are doing excellent work, and have an enormously full load of work. However, it will be essential for Dr Winfree and everybody in the town who cares about pedestrian safety to follow up to make sure that crosswalks don’t drift back to their previous, dangerous state. Ultimately, Princeton is going to have to aim for stronger action to make our local streets safe, as in many cases we are currently  settling for band-aid type solutions when what is needed is major surgery.

Thanks to everybody who wrote letters to support the ability of children to cross the street safely at Chambers Street! Do you have any thoughts about pedestrian safety in Princeton? Please leave them using the comments box below!

17 Responses to What Happened When A Local Mom Asked Princeton For Improved Crosswalks?