Are ‘Playborhoods’ The Best Indicator Of Livable Communities?

Posted on July 10, 2013 by walkableprinceton

Is the best sign of a functioning neighobrhood the sight of kids playing? (Click to expand, via good.is)

When thinking about walkability and a livable neighborhood, several things let us know  when we’re getting it right. Are these things present in Princeton?

In the U.S, men’s cycling trips surpass women’s by a ratio of 2:1. If you want to know if a neighborhood is effectively giving equal priority to cycling as to car-driving, you don’t need any complicated formulas– just look for female cyclists. Women cyclists are considered to be an ‘indicator species‘ and they come out more when roads are safe for everybody. In the Netherlands, 55% of bike trips are taken by women, and in Germany, 49% of bike trips are taken by women. 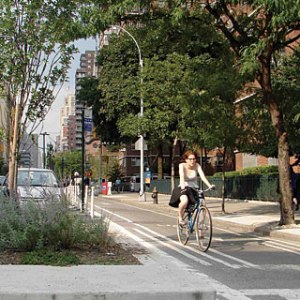 Are women cyclists an ‘indicator species’ for alternative transportation?

#2 Kids playing in the street

Good neighborhoods are ‘playborhoods’. In decades past, the streets were full of kids shouting and laughing as they played together. It’s something you rarely see today, even in Princeton. Streets are the domain of cars, and children are parceled up neatly in the back seat on their way to various classes. We can bring back streets as a place for kids (and adults!) to meet and get to know each other, but only if we re-consider our streets as more than mere thoroughfares for cars, but also a key part of our public space!

Do you remember playing in the street as a kid? Do you think it still goes on much in Princeton today? Leave your thoughts in the comments section below!

This entry was posted in Community, Complete Streets and tagged Cycling, Princeton, Walkability. Bookmark the permalink.