Posted on June 25, 2013 by walkableprinceton

Princeton University visiting faculty are set to get a fantastic new place to stay on Olden Street, just off Nassau Street at the north-eastern edge of the university campus. Construction of new apartments designed by J Robert Hillier is well underway and it’s great to see that the mature trees are being preserved. Mr Hillier’s past projects have included the Princeton Public Library and the ‘Waxwood‘ condominium conversion on Quarry Street (among many others!). In addition to being close to the University, this housing will be footsteps away from some of the best restaurants and activity centers in downtown Princeton. 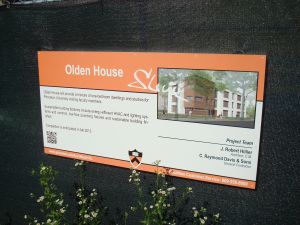 The new apartment complex will be called ‘Olden House‘, which  is also the name of an 18th century cottage on the Drumthwacket grounds. There will be no mistaking the two buildings, as this new Olden House will be a 3-level structure, featuring understated modern styling and up-to-date energy-efficient features. The building takes the place of three older structures that had formerly been used for apartments. One was knocked down about 15 years ago, while the other two remained boarded-up in recent years. A model of the proposed development can be seen on the University’s website.

This project is a good example of compact walkable development, which has progressed quickly with the apparent approval of local residents. Planning was at a preliminary stage in January 2010, but the building could well be finished by the end of 2013.  Whereas many people believe Princeton to be ‘built out’, there are quite a few sites like this in the downtown area that are unused or under-utilized. Filling in these sites is one way to increase walkable housing opportunities without significant changes to the Princeton street-scape. The three lots that Olden House is being built on have a combined area of less than a third of an acre. The density of this development, with its 18 units, will therefore be more than 50 units per acre, a figure that has been suggested to be excessive at other sites in the town.

This entry was posted in Density, Princeton, Smart Growth. Bookmark the permalink.

2 Responses to New Princeton U. Housing Rises On Olden Street