Protect The Grid And Our Trees

Posted on June 17, 2013 by walkableprinceton

A ‘Y-tree’ in Princeton, produced when the tree is cut away in the middle to allow electrical wires to pass through. (Click to expand)

The beautiful trees that line our Princeton streets are frequently sliced in half to allow electricity wires to pass through. Carving out the middle of the tree canopy makes the tree take on the shape of the letter ‘Y’, and these ‘Y-trees’ are common in and around Princeton. This is crazy. In addition to seriously detracting from the natural form of the trees, overhead electrical wires are a liability, which can be knocked down by any passing storm, leaving Princeton residents without power. Overhead wires are also u-g-l-y, and detract from our street-scapes.

Multiple storm lines passing by Princeton last week ended up being milder than anticipated, but still caused the collapse of electrical wires and road closures in Princeton. In the future, storms are likely going to be more frequent and more powerful. It’s time to move these wires underground. PSE&G, our local electrical utility, agrees, and after the devastation of Hurricane Sandy in 2012 has now presented a plan intended to act as a road-map to move wires underground. This plan is intended to make the local grid more resilient to future weather events, and is called the ‘Energy Strong‘ program. 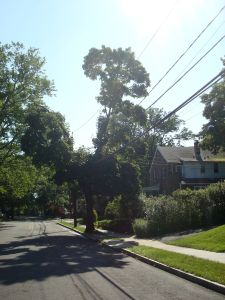 A particularly mutated Y-tree in Princeton (Click to expand)

Putting wires underground is not a small task, and the financing of the project is a big question. The ‘Energy Strong’ Plan would take 10 years and cost $4 billion. The proposal warrants careful scrutiny by the regulatory authorities at the Board of Public Utility. Low interest rates, a declining cost of natural gas, and the expected expiry of other customer surcharges makes the present time a moment when the utility could take on a significant infrastructure project without passing on huge costs to residential customers. On the other hand, large corporate electricity users, such as chemical companies, have mobilized to oppose the plan, arguing that the plan is vague and likely to perpetuate high energy costs in New Jersey. 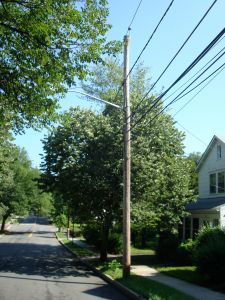 Further growth by this tree will require the central part of the tree to be cut out, making it a ‘Y-tree’.  (Click to expand)

All of us feel the cost of high cost of electricity, and we should look to reduce that through increased energy efficiency and scrutiny of our utility companies. But the present situation is ridiculous. The way Princeton homes are currently connected to the electricity grid is little better than in a trailer park. Princeton is a relatively dense, residential town, where investment in infrastructure would have a greater effect, because more homes can be linked to every mile of underground cable. And then we wouldn’t have the prospect of our senior citizens shivering in their homes next time there is a major storm. The details of the ‘Energy Strong’ plan must be worked out soon, and not deferred indefinitely until the present helpful economic conditions pass. ‘Y-trees’, like dirt roads, should become a feature of Princeton history, forgotten as we bring our infrastructure up-to-date.

3 Responses to Protect The Grid And Our Trees