Why Does Princeton U. Score So Badly On Walkscore?

How walkable is your college? One way to measure this is to use Walkscore, which attempts to quantify how walkable any location is by calculating its distance from stores, services, transit and other useful stuff. We previously tested Walkscore and found that although locations in downtown Princeton get scores consistent with being a “Walker’s Paradise”, some other neighborhoods in Princeton are rated as ‘car-dependent’.

With this in mind, we made a league table of Ivy League Schools based on  Walkscore ratings from www.walkscore.com. Shockingly, Princeton University placed dead last! In fact, although the other Ivy League Schools showed a range of [pretty high] Walkscores -from 74% at Cornell to 97% at 1st-placed Brown- Princeton showed up as an outlier, with a Walkscore of just 54%!

What’s going on?? Princeton University lies right by Princeton downtown, and has a campus masterplan that is entirely based on being ‘walkable’. With this in mind, we decided to look a little deeper, and came up with three potential explanations for Princeton U’s low placement in this league:

Our first reaction was denial: there must be something wrong with the test! And indeed, on further inspection, we find that the location that Walkscore uses for ‘Princeton University’ is, bizarrely, next to the Roberts Stadium! 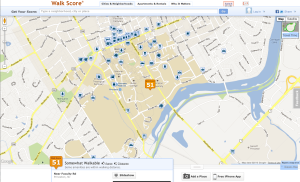 Walkscore screengrab: Princeton U appears to be represented by the Roberts Stadium. (Click for larger view)

Explanation #2: Princeton University Is Being Punished For Its Large Campus

If we look at Google Maps, which is rapidly becoming the web’s official representation of the planet, then ‘Princeton University’ maps to a central point in campus, close to the Roberts Stadium:

This is because Google Maps places labels for large sites in the middle, rather than at one edge. The same problem came up when we measured the Walkscore of ‘Princeton, NJ’, which is listed at a location next to Community Park South, and therefore gets a Walkscore of just 68% despite being one of the most walkable towns in the state. In the case of Princeton University, the large cohesive campus may be leading to a lower walkscore, because the university maps to a site in the middle of that campus, away from stores and downtown amenities. By contrast, Brown University is made up of several separated ‘bits’, with commercial streets running in-between. This helps lift it to 1st place in the Ivy Walkscore League: 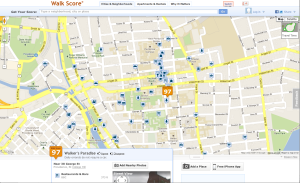 Screengrab of Walkscore for Brown University, showing how the campus is integrated around city streets. (Click for larger view).

How walkable your experience of Princeton University is obviously depends on whereabouts on campus you live. If you are living in Mathey for example, you are close to town, and will easily be able to hit up the stores and restaurants along Nassau Street. But if you are living elsewhere, stuff can be much further away, which leads us to…

There is no doubt that Princeton University has an excellent campus that makes walking around an absolute pleasure for tourists and sightseers. But Walkscore doesn’t reward nice views, it measures how close you are to goods and services, and for many students, that is a challenge. If you live in somewhere like the Butler apartments, you’re at least half a mile away from anything. What’s more, even if you can get to the main Princeton downtown shopping area, many of the stores cater to the expensive end of the market. Some students have complained that reasonably-priced stores that cater to them are in short supply in downtown Princeton. Many services are supplied on-campus, reducing students’ need to look towards services in the town, but creating the ‘Orange Bubble‘ phenomenon. The idea that Princeton students have access to lots of walkable goods and services is also undermined by the fact that the University has to run a bus to ferry students to stores in strip malls down on Rt 1.

At Walkable Princeton, we are in favor of policies that increase the retail options in the downtown area. Town-Gown relations are not just about arguing over PILOT payments; we should also work together to ensure that Princeton offers the best possible experience for students. A vibrant downtown with many useful goods and services is of much greater value to students than stores out on Route 1, and will make Princeton more livable and walkable for everybody. By providing the goods and services students want, Princeton can become a greater and more integrated College Town for students and residents alike.

We’re interested to know what you think: are you able to access the groceries, restaurants and services you want on foot? What stores or improvements do you think would make Princeton more walkable? Leave a comment below..!

4 Responses to Why Does Princeton U. Score So Badly On Walkscore?