Posted on April 19, 2013 by walkableprinceton 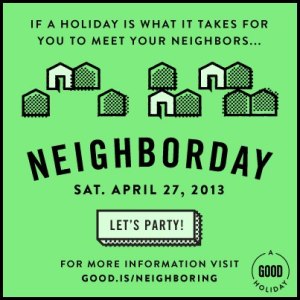 How well do you know your neighbors? It’s a funny thing that in 2013, when we are more connected than ever before, via cell phones, social media and 24-hr news, we don’t always keep in touch with those living nearby in our own communities. Good.is, which styles itself as ‘The Social Network for Social Good’ is promoting a new holiday: ‘Neighborday‘. This is an opportunity to remind us to connect with our neighbors, and can be celebrated in many ways, as the promoters suggest:

Whether it’s as simple as summoning the courage to ask the guy in apartment 3B what is name is…again, or as ambitious as coordinating a full-fledged block party replete with a mariachi band, bouncy castle, and street hockey tournament…

Other communities have had a dedicated ‘Neighbor Day’ for years. The town of Westerly, R.I. has been celebrating their Neighbor Day on the weekend before Memorial Day in May since 1993. They celebrate their Neighbor Day as an opportunity for “producing equality, respect, dignity, justice but most of all love for our neighbor”. For the 20th anniversary event, the organizers even got recognition from the Queen of England! New London, CT also now has an official Neighbor Day, although it is not clear if this one has received royal approval.

Having good neighbors is great because it reminds us that we are a community, and share responsibility for our shared resources. Good neighbors help maintain law and order in our neighborhoods, help us out with a cup of sugar in a pinch, and group together for mutual support after disasters like Hurricane Sandy. Princeton is a neighborly place but that doesn’t mean we shouldn’t take our neighbors for granted. It’s easy to allow petty annoyances to harm our relationships with our neighbors. Are you annoyed by local residents using gas-powered leaf blowers? Did they cut down a beautiful tree or shrubs that you loved? Or are they leaving their trash or recycling cans out in the street for too long?? Most neighbors have disagreements about something at some time or another. But good neighbors can talk about and sort out their differences without letting it ruin their relationship.

One reason why we love walkable neighborhoods is because they promote interaction with our neighbors. Instead of shutting ourselves off behind fences in splendid isolation, we tend to see our neighbors frequently when we are out on foot in the street. This is a good thing, as it promotes community and shared responsibility about our town. Neighbors should be there for one another; that’s when good neighbors become good friends.

This entry was posted in Community. Bookmark the permalink.