For Dying Plainsboro Mall, The Solution Is In Plain Sight

Posted on April 11, 2013 by walkableprinceton

Since the closure of the Superfresh supermarket earlier this year, the Plainsboro Plaza Shopping Center is looking increasingly shabby. With acres of empty parking lots, vacant stores and a generally sad atmosphere, it bears all the symptoms of a dead mall. The Superfresh store even has a ‘label scar’: an outline where the supermarket logo previously appeared.

The good news is that ownership of the mall recently changed, to a new company who are promising big changes. We say the changes can’t come soon enough. Why is Plainsboro Plaza down on its luck? One [likely] reason is that people have so many options now for shopping, with many preferring Route 1 supermarkets over their local store. Part of it may be simple mismanagement by the former owners. Another factor is that these kind of old-school destination strip malls are struggling all around the country as demographic tastes change.

For the new owners, there is an amazing opportunity here. Plainsboro is a fast-growing, multi-cultural and friendly community, whose population has grown by a factor of 15 since 1970! Jobs are plentiful in the area, including a new R&D center, plus the new ‘University Medical Center of Princeton at Plainsboro’, which relocated here from Princeton last year. What’s more, the answer to how to make a vibrant, successful space is in plain sight, directly across the road at the newly-completed, award-winning ‘Plainsboro Village Center’: 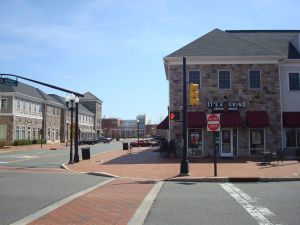 With a mixture of uses, Plainsboro Village Center offers a gym, independent coffee store, fantastic public library AND places to live. Its forward-looking planning won a major award for smart growth from NJ Future. However, many of the condos and townhomes are expensive, and as always, some more affordable options would be welcomed. If the new owners of Plainsboro mall redeveloped the site with some housing and added a few green spaces, Plainsboro Plaza could be transformed into one of the most  desirable places to live in Central Jersey. This location also offers bus service (NJ Transit #655) and bike paths to central Princeton. If a supermarket could be lured back to Plainsboro Plaza, this would be one of the best sites in the entire Princeton area to live a car-free or car-lite lifestyle.

The key here is for the new owners to think beyond Plainsboro Plaza as a traditional mid-twentieth century strip mall and look for the opportunities to provide highly-valued walkable homes. Let’s hope that the berst years for Plainsboro Plaza are still in the future!

This entry was posted in Local, Smart Growth, Zoning. Bookmark the permalink.

6 Responses to For Dying Plainsboro Mall, The Solution Is In Plain Sight