Posted on June 17, 2021 by walkableprinceton 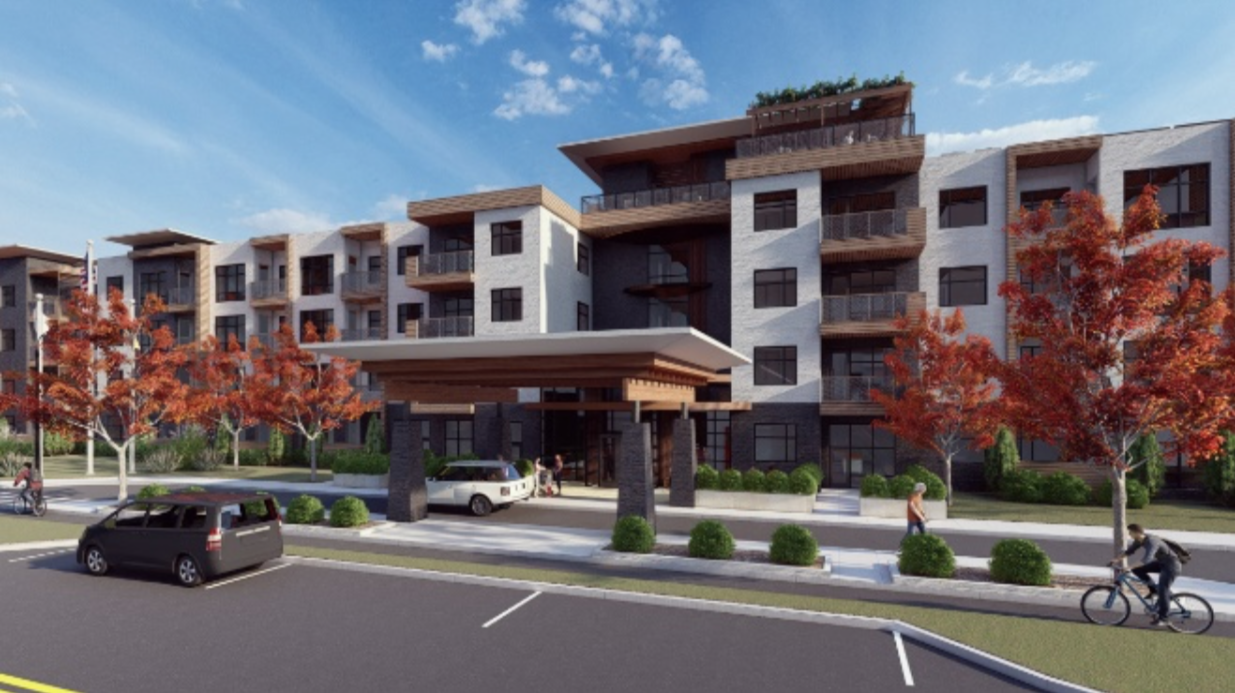 Rendering of concept for multifamily housing on Terhune Road, approved by Princeton Council on 6.14.21

A concept plan for a 124-unit multifamily residential building was approved by Princeton Council at their regular meeting on Monday night (link to meeting agenda and packet). The site, at the corner of Terhune Road and North Harrison Street (map), was already designated as a location for an inclusionary affordable housing development as part of the town’s 2020 Fair Share Housing Plan. The new plan shows significant new details, however, including the required architectural standards, and the proposed road network that will connect the development to the surrounding neighborhood.

The 6-acre site at Terhune Road and North Harrison lies directly to the north of the Princeton Shopping Center. It is currently undeveloped and partially wooded. In the 1990s, a proposal for a senior living development here was abandoned after neighborhood opposition, and a subsequent attempt to build a long-term care facility for seniors was rejected by the Zoning Board of Adjustment in 2018. Princeton Council designated the area as a new “AH-5” zone for affordable housing as part of the 2020 Fair Share Plan, allowing up to 22 dwelling units per acre, with a requirement that at least 20% of any new homes must meet state standards for affordable housing. Buildings of up to four stories and 45-ft were permitted in the AH-5 zone. 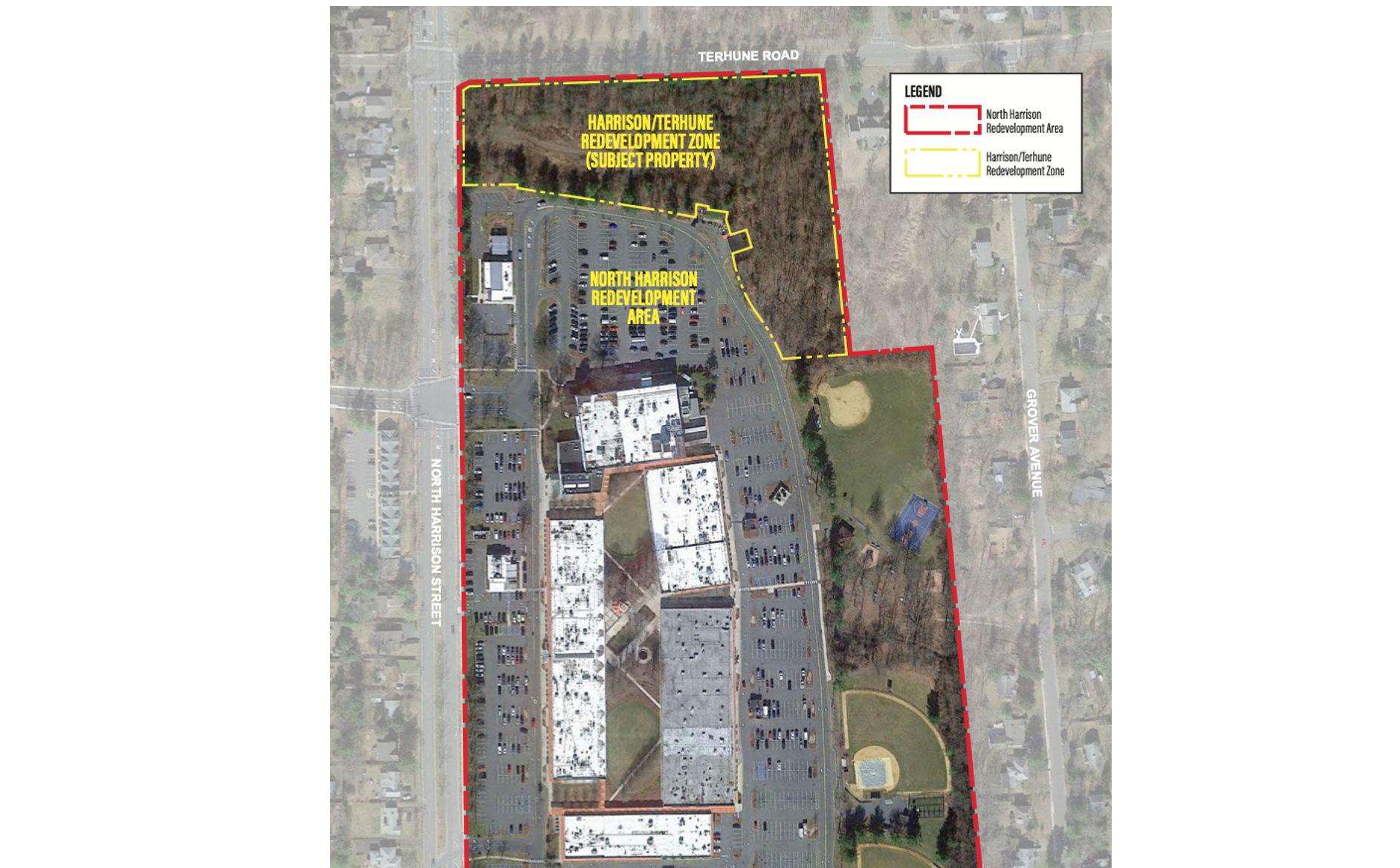 The ‘Harrison/Terhune Redevelopment Zone’, at the north end of the Princeton Shopping Center.

Terhune Development LLC, a subsidiary of the Boston-based WinnDevelopment Company, has permission to develop the site. Standards for development of the site according to the AH-5 zoning regulations were developed for Princeton Council by the Clarke Caton Hintz planning firm, based out of Trenton NJ. Their plan shows a single, large building, with 124 residential units, oriented parallel to Terhune Road, with a main entrance accessed from Terhune Road. The concept plan is “intended as an illustrative plan and not a strict blueprint for redevelopment”, but shows a level of detail that indicates that site planning is well under way. The development would have 62 one-bedroom units, 56 two-bedroom units, and 6 three-bedroom units. At least 25 of the units would be affordable homes. 186 parking spaces are envisaged, in excess of the 1.3 spaces per unit required by the zoning. 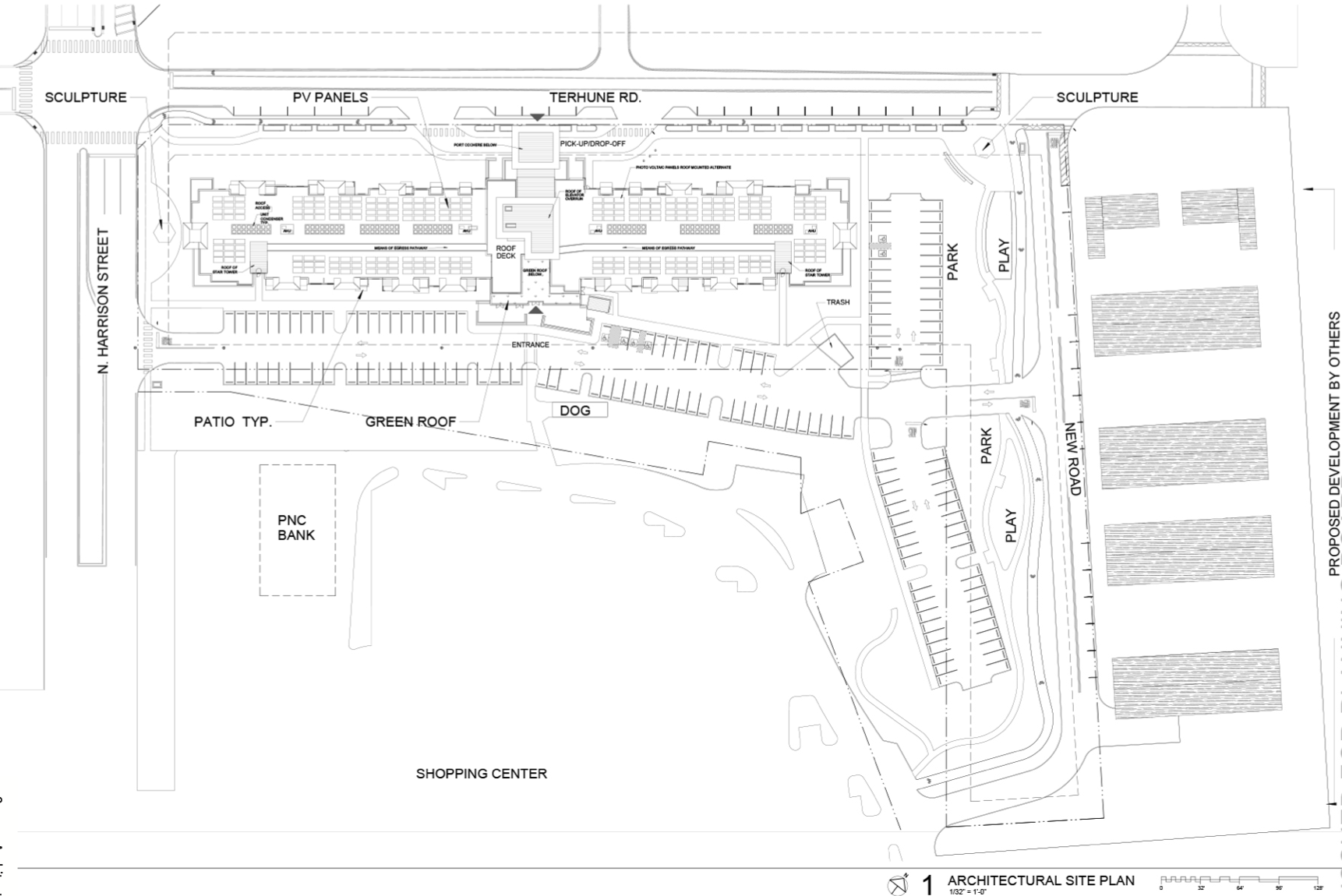 Concept plan for Terhune/Harrison development with 124 new homes, as adopted by Princeton Council on 6.14.21. Shaded areas and ‘new road’ on the right are part of the proposed 375 Terhune development.

The concept plan sets strict architectural standards, requiring the building to be divided into two separate ‘wings’ around the central entrance on Terhune Road. The massing of the building would have to be broken up extensively in horizontal direction by further subdivision into mini-bays of no more than 40-ft, and in the vertical direction by the use of building materials of different textures. The top of the building is recommended have solar panels and / or green roof areas, and must be decorated with “prominent parapets, deep cornices, flat overhangs such as sunshades and projecting fins”. Every unit must have either a ground-level patio or a balcony. One possible rendering of the building is included in the concept plan, as shown in the image at the top of this article.

The new development would be accessed by road in one of four ways. First, a ‘turnabout’ off Terhune Road would allow quick drop-offs and pick-ups at the main entrance, around a ‘porte cochère‘ overhang. Second, an entrance / exit to North Harrison Street would lead to a large off-street parking lot to the rear of the building. Third, the development would connect to a new road, to the east of the site which will be constructed to provide access to the proposed 375 Terhune townhouse development. This road would also connect through to the parking bays at the rear of the Princeton Shopping Center site, providing a fourth potential entry / exit point to the development. Street parking would be permitted on Terhune Road in front of the new development. A bike lane is required adjacent to the street parking. In the conceptual rendering, this bike lane is shown as a protected bikeway.

The site at Terhune Road and North Harrison St as it appears today. To the south is the parking lot for McCaffrey’s supermarket and PNC Bank within the Princeton Shopping Center.

The site standards also call for a number of nice features around the building. In addition to a private rear patio for the residents, a series of ‘landscaped open spaces’ will be provided along the eastern side of the site. A new walking path will be added through these landscaped areas, allowing a new connection for pedestrians going from Terhune Road to the Princeton Shopping Center. The concept plan shows areas that may become playground spaces and a dog park. Porous pavement is encouraged to reduce stormwater run-off. Eight electric car charging stations are required. Public art, in the form of ‘prominent’ sculptures, will be added at the perimeter of the site, in two locations, on Terhune Road and North Harrison Street. Existing trees would be preserved where possible, and new street trees, ornamental trees, and native shrubs would be planted around the site.

Before any construction takes place on the site, the developer would need to submit a full planning application to the town, which would be reviewed in a public meeting with the potential for public comment. If built, the development would add to a pipeline of upcoming  projects in the neighborhood, including the 30-unit townhouse / apartment development that was recently approved at 375 Terhune Rd, as well as a new 221-unit Avalon Bay apartment complex and an 80-unit senior living project that have been approved across the street on Thanet Road.

To review the discussion of the ordinance approving the site standards by Princeton Council, see the video below (discussion starts at 57:03):