Posted on December 18, 2019 by walkableprinceton 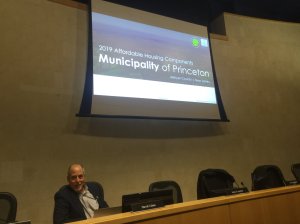 The town of Princeton has released its new affordable housing plan (link here). The plan envisages over 700 new units of housing, which must be in development by 2025, to comply with state housing laws.

Introducing the plan, Mayor Lempert explained that the revised plan builds on a previous version that was released in May 2018. The 2018 draft housing plan had a number of issues, which have been the subject of mediation in court. In particular, two sites that belong to Princeton University (the ‘Butler Tract’ and land near Princeton Rail Station on Lower Alexander Street) have been taken out of the new plan, because the University is reportedly not ready for construction to begin on those sites.

In place of the Princeton University lands, the town is including two new sites in its new affordable housing plan. These are the former SAVE animal site, on Mt Lucas road, and a disused office park on Thanet Road. Both of these sites have been discussed previously by Council. The Thanet Road site will be subdivided into an Avalon Bay apartment development with inclusionary affordable housing, and a 100% affordable senior housing development. The amount of housing to be built at the Princeton Shopping Center site on North Harrison Street has also been increased. Whereas the previous plan called for 150 units at Princeton Shopping Center, the new plan calls for 200 units. These are the sites for the planned developments:

The proportion of affordable homes that will be built at these sites is higher than what was included in the previous plan, which means that the town can meet its state-mandated affordable housing requirement by building a smaller total number of homes than what was previously imagined. The 2018 housing plan involved building approximately 1,250 new homes, but hone plan only requires 730 new homes. Nonetheless, the total number of homes that meet the state definition of ‘affordable’ is slightly higher in the new plan than in the previous draft.

In addition to the new housing developments, the town will also create new ‘affordable housing zoning overlays’ on 28 lots on Nassau Street in downtown Princeton. These new zoning overlays will allow the properties to be redeveloped with ground floor commercial uses and two additional floors of residential rental accommodation. 20% of any apartments constructed in these developments must be designated as below-market-rate affordable units. This zoning change is intended to make it easier to add new affordable developments in the former Princeton Borough.

Public comment included discussion of whether the housing plan could be described as ‘Smart Growth’. Some members of the public argued that the sites for new housing were not walkable to downtown. Mayor Lempert argued that the new housing would support new activity centers in the municipality, in particular around the Princeton Shopping Center, and at an emerging activity cluster in the northern part of Princeton near Montgomery Township. Although the housing would not necessarily be walkable to downtown, it would be walkable to these other commercial areas, and would help support new centers of activity around the town.

A large majority of the new units (approximately 560 new units of housing) will be constructed in or around the Princeton Shopping Center. Mayor Lempert described this as a good thing, because it would allow new residents to access goods and services at the Shopping Center, and help support businesses there. None of the proposed new affordable housing will be located in the ‘Western Section’ of Princeton.

In public comment, concerns were expressed about the impact of the housing plan on schools. Several members of the public also said that they had not had enough time to adequately study the new housing plan. Council nonetheless voted through several key measures to approve and enact it. Outgoing Council President Jenny Crumiller, who has been heavily involved in developing the plan, expressed satisfaction at the final product. Councilor Dwaine Williamson described it as “not perfect…but considering reality, it’s a good outcome”. Councilor Leticia Fraga said that Princeton would benefit from the diversity that will come with new affordable homes. A brief round of applause greeted the final vote to approve the plan.