Posted on March 7, 2019 by walkableprinceton 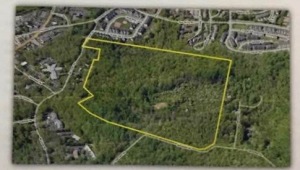 Boundaries of site for proposed new houses off Herrentown Road in Princeton. (click to expand)

The Lanwin Development corporation is proposing to build a new subdivision on the Princeton Ridge, which will be discussed in the Princeton Planning Board meeting tonight (March 7, 2019 – but may be continued to the meeting on April 4). The project site would be at the top of Bunn Drive on Herrontown Road, on what is currently a wooded site (see photo above). The site is across the road from the Stone Hill Church of Princeton. There are existing homes in the area, on Herrontown Lane, and to the north, the townhouse developments off Blue Spring Road in Montgomery Township. This is one of the most car-dependent parts of Princeton, with a walkscore of just 5 out of 100. Decades ago, former residents tried to farm this rocky area, and two derelict dwellings still stand on the land.

According to site plans submitted by the developer, the new subdivision would include 30 houses on 1/2-acre lots, on two new cul-de-sac streets named ‘Harper Court West’ and ‘Harper Court East’. The subdivision would connect to Herrontown Road via a short access road called ‘Bruere Lane’. Each house would have a 2-car garage. Utilities would be underground, and connect to existing facilities on Herrontown Road. The homes would be on the flatter part of the site, in the area that was previously farmed.

Proposed site plan for ‘Bruere Lane’ and ‘Harper Court East and West’. (Herrontown Road is at the bottom of the picture, click to expand)

The developer is proposing to build 30 homes using ‘cluster zoning’, which means that instead of dividing the whole site into lots and building houses on them, the developer would instead build on a smaller portion of the land. Less natural area is therefore disturbed, and the amount of new roadway to be constructed is minimized. Conventional Princeton R-A zoning in this area allows construction of 20 homes on 4-acre lots. This would also require extension of Herrontown Road to provide site access (currently, there is a ‘gap’ in Herrontown Road between Mount Lucas Road and Bunn Drive).  The proposed residential ‘cluster’ would involve development of just 20 acres of the 90.6-acre site. More than 75 % of the site would be left as intact woodland, and three acres, which border Mt Lucas Road, would be given to the town for construction of affordable housing.

Map showing proposed site for the 30 new homes. The area to be donated for affordable housing constrution is the black box at the top left. (click to expand)

The gift of a site for affordable housing, the preservation of open space, and proposed new walkways earn bonuses for the developer, which means that 30 homes could be allowed instead of the 20 homes that would be built using conventional zoning. The extra homes caused concern for members of the Princeton Environmental Commission, however. They issued a report expressing concerns about a ‘serious problem’ of stormwater management, relating to steep slopes in the area and the non-porous rock of the Princeton Ridge. Environmental concerns are likely to be a focus for the Planning Board. Opposition to the plan has been brewing on social media and letters published in local newspapers. According to a letter of interpretation from the New Jersey Department of Environmental Protection, 7.5% of the site is made up of wetlands.

Although traffic engineers estimate that the 303 daily car trips generated by the proposed development would have ‘minimal’ impact on local roads, the town’s staff are recommending that Herrentown Road be widened by the development site, to allow two 10-ft travel lanes and two 5-ft bike lanes. Municipal staff have also requested that a path be built to connect the proposed ‘Bruere Lane’ to existing sidewalks on Bunn Drive. In theory, a resident of the new development could use these sidewalks to walk to the office and commercial sites on Bunn Drive in 20 mins, or to the Princeton Shopping Center in 30 mins. The town’s staff also proposed easements on the property to allow public access to the open space area, and potentially to allow people to walk from the residential areas in Montgomery Township through the site to Autumn Hills Reservation.

The nearest transit access would be the bus stop at Princeton Community Village, which is a 10-15 min walk from the development site, and which is serviced by NJ Transit buses and the town’s “FreeB” shuttle.