Posted on November 4, 2018 by walkableprinceton 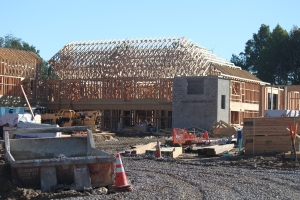 ‘Freedom Village at West Windsor’ under construction in October 2018. The development will provide housing for disabled and low-income people. (click to expand. via Project Freedom)

Last month, West Windsor Township, NJ announced its proposed affordable housing settlement. The settlement explains how the town plans to provide its ‘fair share’ of affordable housing, as is required by state law. Every other town in Mercer County, with the exception of Princeton, had already settled its affordable housing requirements. The developments proposed in the ‘fair share plan’ are likely to have a significant impact on West Windsor Township. The town will be adding over 4,000 new housing units, in a town that currently has a population of about 27,000. But how will the new developments affect the built environment in West Windsor? Do the development proposals offer an opportunity for West Windsor to become more walkable? We took a look at the plans to find out more.

West Windsor’s affordable housing requirement will be met by construction at a number of sites. Full details are available at the West Windsor municipal website at this link. We focused on eight large projects, which all involve construction of at least 70 new homes. They are:

In this clickable map, the borders of West Windsor Township are shown in blue, and the eight proposed developments appear as red pins:

Let’s examine the proposed developments in more detail. In each case, we have looked up the ‘Walkscore’ for each site. walkscore.com is a website that gives a score out of 100 for any address, to show how easy it is to walk from that address to stores, schools and community amenities. Scores greater than 70 are considered to be “very walkable”. For example, Palmer Square in downtown Princeton rates at 94, a “walker’s paradise”. Scores of less than 50 are considered “car-dependent”.

Approved as ‘Freedom Village at West Windsor’ last year, the project will be 100% dedicated for people with disabilities and low-income households. Construction began in October 2018 and photos of the site can be seen at at the Project Freedom website here.

West Windsor has been talking about redeveloping the area around Princeton Junction NJ Transit station since at least 2004. The current Avalon Bay proposal, which has been included in the town’s fair share plan, seems like it really might get built. A final site plan is expected in 2019, but the project can include up to 800 units of housing, along with commercial space. 132 of the units will be dedicated as ‘affordable’. The mixture of uses and proximity to the West Windsor rail station may make this a viable site for walkable living and transit use.

This project is being built on lands belonging to Princeton Theological Seminary at the northern edge of West Windsor. The site is near the ‘Marketfair’ mall and bus routes, so it is possible that the project could allow walkable living with appropriate design and attention to pedestrian routes. 89 units will be dedicated as ‘affordable’ units under an ‘inclusionary zoning’ approach. Princeton Theological Seminary is also redeveloping some of its lands in Princeton, but it is not clear if that project will include affordable homes. 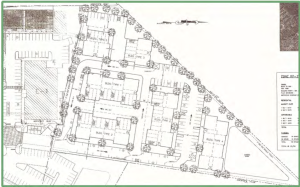 So-called because it is apparently just ‘400 steps’ from Princeton Junction rail station, this site has long been a target for redevelopment. We first wrote about it back in 2004. Whereas the original plan had 4 buildings and 39 units, the current plan calls for 100 units in six buildings. 20 of the units would be designated as ‘affordable’.

Set among the farmland at the eastern boundary of West Windsor, this development of townhomes with attached stacked flats will include 25% ‘affordable’ units. A group home for people with developmental disabilities will adjoin the development.

This fairly-enormous development of mid-rise apartments and garden apartments will be situated in one of the most car-dependent parts of the township. It will include 157 affordable units under a proposed inclusionary zoning plan. 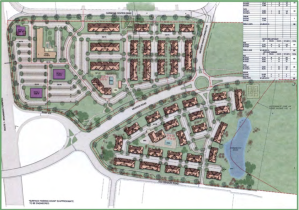 This development will include 492 market-rate units and 164 affordable units. The homes will be a mixture of apartments, townhomes and single-family homes. A hotel is also proposed, along with commercial uses and offices. Although the site is currently not walk-friendly, the Township is proposing to alter the zoning at this site to a “Planned Mixed Use Neighborhood/Affordable Housing District”. The intention is that the new zoning will “encourage a mixture of uses on the site, while creating a pedestrian- and bicycle-friendly development.”

This is a proposed extension of an existing senior housing neighborhood. 53 affordable units will be included. A site plan is not available at this time.

Overall, the West Windsor affordable housing plan seems to be a mixed bag. The mixed-use, transit-oriented developments near Princeton Junction rail station (Avalon Bay, ‘400 Steps’) could bring new opportunities for car-free living to West Windsor. The proposed “Planned Mixed Use Neighborhood/Affordable Housing District” off Meadow Road (‘Roseland / Mack Cali’) could also be really good, if the town is able to get it right. On the other hand, the two developments on the eastern side of West Windsor seem likely to spread development into semi-rural areas and put further pressure on the road network. That would not be the goal of a ‘Smart Growth’ approach. The town of Princeton is currently working on its own affordable housing settlement. According to court filings, the plan should have been completed last week. If so, it should be unveiled very soon.