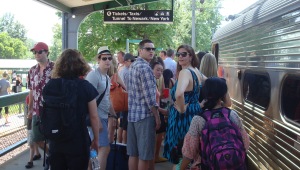 Passengers gather around the Princeton Dinky train at Princeton Junction station, where substantial new housing is planned. (click to expand)

800 new homes. 37,000 sq ft of commercial development. This is what West Windsor Mayor Hemant Marathe has agreed to build next to Princeton Junction Station. News of the new developer agreement was released by Diccon Hyatt at US-1 newspaper. The builder will be Avalon Bay, who also built the new 280-unit apartment complex at the former Princeton Hospital site on Witherspoon Street in Princeton. The new development will occupy 25 acres next to Washington Road, and will include 132 units of affordable housing.

As part of the plan, Avalon Bay has apparently agreed to fund upgrades to the US-1 / Washington Road intersection. This intersection at “Penns Neck” has been the subject of ongoing discussions between local Mayors including Princeton Mayor Liz Lempert.