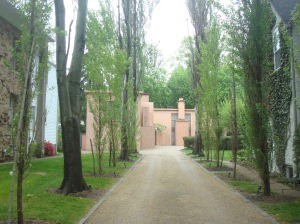 On Saturday, the first Princeton ‘Jane Jacobs Walk’ took place, honoring what would have been the 100th birthday of the famed urbanist. I’ve never been on a  Jane’s Walk before, so  it was a whole new thing. But it was great to get together with some local residents, and enjoy the great stuff that exists in our town. Although Princeton is a small town, there is much to discover, and in a group its even better because different people can point out different things that they know about. On this walk, we started from Small World Coffee East Nassau, at 254 Nassau St. Our group considered the nearby busy commercial area, much of which is zoned as ‘special services’ reflecting its history as a strip of automotive garages, gas stations and car dealers. (It is now a top dining destination in Princeton). The group was conflicted over the current plan to build a roof deck and screen in the front dining space at Blue Point Grill. Some people worry that it will take away what is currently a great informal outdoor community gathering space. Personally, I think it will be great, and I would like to see the new “Nina’s Waffle’s” open a similar outdoor dining area. This is what a Jane’s Walk is for: discussing what we like in the built environment, and thinking about what we would like to see more of.

As our walk continued, we passed the new ‘Andlinger Center for Energy And the Environment‘ on Olden Avenue. This is Princeton University’s latest research space, opened last year. From the street, it looks like this:

And linger Center for Energy and the Environment, (click to expand)

I have always found the building to be pretty impersonal, but on our Jane’s Walk, some of the other participants pointed out to me that the site contains an intricate network of internal walking paths, leading around a number of sunken and raised gardens containing a range of lush plantings: 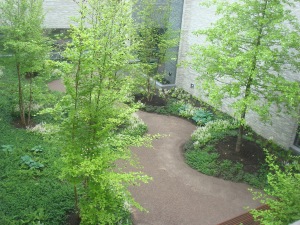 Interior courtyard of the Andlinger Center, with walking path (click to expand)

This garden is actually a ‘green roof’ above research space below: 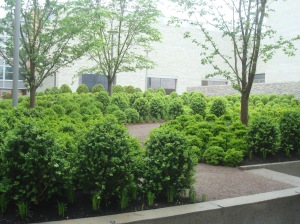 I don’t think I would ever have discovered these paths if I hadn’t done the Jane’s Walk. We can learn a lot from talking to our neighbors! The entire Andlinger Center site was apparently built on former playing fields. An outhouse used to stand on Prospect Avenue, where an entrance to the research site now stands. As Princeton University is preparing a new ‘campus plan’ it is worth thinking about how the campus has changed over the decades. What are playing fields today could be hi-tech research space in the near-future.

As the Jane Jacobs Walk continued, we made a few detours around Prospect Avenue to explore the nearby architecture. A visit to Michael Graves’ former home at ‘The Warehouse’ on Patton Avenue seemed essential (see photo at top). The house was redeveloped over several decades by the legendary architect, who passed away last year. It is remarkably understated, tucked away off the street. Across the road, however, is this much more whimsical design. Is it a quirky delight, or a disruption of neighborhood character?

New construction on Patton Avenue in Princeton. (click to expand)

Returning to Nassau Street, we passed a huge house.Presumably, this house was built for an affluent family in years gone by. Now, it has been broken up into 8 apartments. Surely whoever built this house never imagined such an outcome? Might the ‘McMansions’ that are the subject of protests today be similarly converted into rental accommodation in the future?

Mansion for rent, in Key West colors, at Nassau and Princeton Avenue. (click to expand)

We finished our walk passing the former home of author Toni Morrison on Nassau Street, sometimes known as ‘The House of the Seven Gables’:

Unfortunately, we didn’t get chance to complete our previously planned tour around the ‘Tree Streets’ neighborhood. That will have to wait for a future Jane’s Walk. Hopefully we will walk again sometime in the fall. It’s fun to think about what Jane Jacobs would have made of our walk. Probably she would have found most of the neighborhood around Prospect Avenue and Broadmead to be lacking in energy. (We passed few pedestrians in that area, especially compared to the much-busier Nassau Street.) But Jane would have agreed that having neighbors come together to talk about what works in their community is the best way to figure out how to plan the neighborhood’s future.

Thanks to our partners at the University of Utah ‘Center for the Living City’ for helping to promote our ‘Jane Jacobs Walk’.